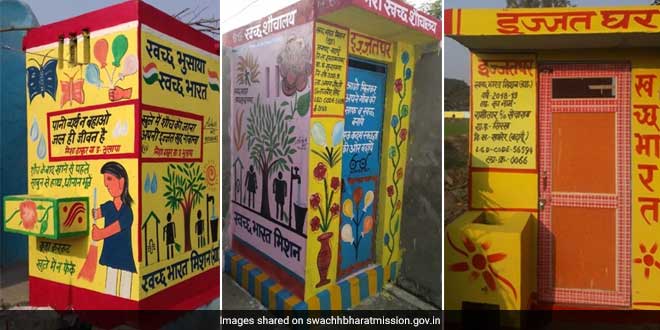 New Delhi: Earlier this year, to fight the age-old practice of open defecation in rural parts of the country and promote toilet usage, the Ministry of Drinking Water and Sanitation (MoDW&S) instituted a unique competition ‘Swachh Sundar Shauchalaya Contest’ (Clean Beautiful Toilet Contest). In the contest, rural households were asked to decorate their toilets. The contest was held earlier in from January from 1 – January 31, According to the ministry, more than 1.34 crore toilets were painted, decorated and given a facelift by the people of rural India under the campaign.

Recently, the ministry released the contest results in which Jharkhand was awarded the No.1 spot followed by Telangana, Daman and Diu, Dadra and Nagar Haveli and Maharashtra. Whereas, Giridih in Jharkhand, Kolhapur in Maharashtra and Peddapalli in Telangana were awarded as three best districts of India for the contest.

The Ministry of Drinking Water and Sanitation took to social media to announce the winners and said,

Congratulations to the states and districts that have been declared the winners of the #SwachhSundarShauchalay contest. We are proud of the efforts and commitment of rural communities towards #Swachhata.

Congratulations to the states that have been declared the winners of the #Swachh Sundar Shauchalay contest. We are proud of the efforts and commitment of rural communities towards #Swachhata. pic.twitter.com/cHhG7SLocK

Congratulations to the districts that have been declared the winners of the #Swachh Sundar Shauchalay contest. We are proud of the determination and efforts shown by rural communities towards #Swachhata. pic.twitter.com/CmHPJX0Vuv

During the contest, Prime Minister Narendra Modi had also lauded the efforts of swachhagrahis (clean India volunteers) who did their bit to be part of India’s swachhata moment. Giving his thumbs up to the contest and volunteers, he said,

You must have heard about many prestigious beauty contests. But have you ever heard about the ‘Toilet’ contest? Over the past few months, in rural India, lakhs of toilets have been decorated with paintings, local art. The reason is simple – to create awareness about the Clean India campaign and motivate people who are still unaware of the mission. People from across India are participating in this unique competition. You will find colourful toilet photos floating around social media, from Kanyakumari to Kutch till Kamrup, India has been beautified with decorated toilets from all parts of the country.

Under the Swachh Sundar Shauchalaya contest, Jharkhand came together to decorate over 54,000 toilets in a month. With messages like ‘Worship toilets, Save Yourself’, ‘Say No To Open Defecation And Make Jharkhand Swachh’ to name a few, Jharkhand was one of the few states to submit the maximum number of entries.

In addition, according to District Collector, Mahimapat Ray, Jharkhand also celebrated Swachhata Diwas in all schools and anganwadis wherein Swachh Matdan (sanitation vote) was given to know if any families are still defecating in the open.

On the state’s achievement, Chief minister Raghubar Das also congratulated and said, “Jharkhand has secured the first position in the Swachh Sundar Toilet Competition across the country. Giridih won the first prize in the district level competition. Full credit goes to people of the state and team Jharkhand officials. We are committed to making the country clean under the leadership of PM Narendra Modi. Such successes inspire us to continue to improve and do more good work.”