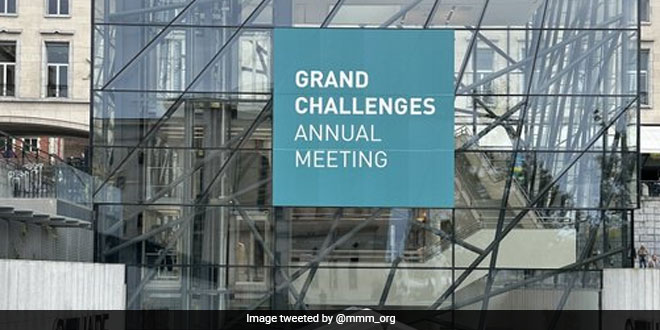 Brussels: The Policymaker’s Forum for Mental Health, India spearheaded a panel discussion at the Grand Challenges Annual Meeting on October 25, 2022, in Brussels, to discuss the challenges around mental health, especially impacting the most vulnerable in India. The discussion was organized in collaboration with Grand Challenges Canada and ETI Services to support the launch of a new and innovative mental initiative focused on young people.

India has witnessed a surge in youth suicides during the last two years during the COVID-19 pandemic. The increasing pressures on mental health are debilitating and require a multidisciplinary, multi-stakeholder approach to propel attention towards a more holistic model of care and support. For addressing this, policymakers, experts and people with lived experiences have come together to identify the gaps in mental healthcare in India and how the present structures can be modified to address the same.

There are various dimensions of this societal malaise and reiterated that there is radical need for paradigm shift in existential biomedical approach, comprehensive and pragmatic government strategies, vibrant health literacy, engaged media & local communities, in collaboration with the local Governments & civil society, responsive corporate sector and innovative technologies besides targeted interventions for the most vulnerable. Aggressive advocacy by the policymakers and elected representatives backed by strong political will play vital role in promoting level of discourse and awareness besides building synergy and intersectoral coordination between diverse stakeholders.

Bhubaneshwar Kalita, MP and member, Policymaker’s Forum for Mental Health, in his address spoke about the burden of mental health issues falling inordinately on women and young girls. He explained,

There are major crises in accessibility, for the female populations, that plague all processes of healthcare (in general)–from diagnosis to treatment. This is exacerbated by the information asymmetry that affects women much more as they still struggle to get educated, and claim their space in the most crucial aspects of public service delivery. If the existing institutions are strengthened and envelop mental health services into their ambit, we can imagine a structural change looking into the future.

Vincent Pala, also an MP and member, Policymaker’s Forum for Mental Health, focused his responses on suicide among the youth in India. He started by highlighting why there is a need to rethink policy around mental health, and how “family issues” and “illness”, and not unemployment or bankruptcy, form the major reasons for suicide in the population between the age group of 18-30 years.

He also took the point of familial spaces not necessarily being safe, as has been imagined for years, by bringing to everyone’s knowledge that housewives tallied more than half of all female victims of suicide, and linked it to the increased cases of reported violence against women at home during COVID-19. Describing how suicides are culturally perceived in India, Mr. Pala had an interesting take,

The stigma associated with suicide is linguistically governed by the popular media and this more often than not leads to underreporting.

Dr Rajdeep Roy, MP and member, Policymaker’s Forum for Mental Health as well as the Member of the Standing Committee or Health and Family Welfare, gave the context of the Mental Healthcare Act, which came in effect in 2017, by suggesting that this was a watershed moment in the history of mental health services in India, as the nature of this act is very progressive by “Initiating the establishment of a central and state authority, and by decriminalising suicide and prohibiting electroconvulsive therapy- the elements of confidentiality, quality healthcare, and rehabilitation enable the act to become a precedent for other nations,” he added.

Dr Shirshendu Mukherjee, Mission Director, BIRAC, India, stated how “India’s biotechnology industry’s role during COVID-19 has been praised by the nation. It makes one look at the necessity for the physical distress caused in crisis to be averted in order to keep the mental health of the population in check. What it disables are risk factors that lead to anxiety and depression among individuals in the long run, and BIRAC looks forward to partnerships to make a difference and enhance innovations around mental health in India.”

Arjun Kapoor, Programme Manager and Research Fellow at the Indian Law Society, emphasized the triadic relationship between legal rights, mental health services, and management on the ground. He talked about some of the important programs and partnerships that the Centre for Mental Health Law and Policy is undertaking in India to ensure the accessibility of mental health services at the grassroots level and also work on suicide prevention.

While some progress in terms of both policy and implementation has been made in recent years, there is still a lot of ground to cover in terms of how mental health interventions are imagined and supplied from the top. The stakeholders on the field, including both NGOs and the general public/beneficiaries, need to be included in the ambit of care whenever planning (for both policy and implementation) is done, to ensure that they devise solutions for themselves; in the universalization of policies at the central offices, voices from the margins are often ruled out.

Dr Sukriti Chauhan, CEO of ETI Services, spoke about her experience of working on mental health, particularly with adolescents. She started with how there are more complex, convoluted mental health illnesses than the generic populations know about, and they are also largely age-sensitive, even within the group of adolescents (10-19-year-olds).

Given that, while the usual measures of promotion, prevention, and early detection can help in mitigating the imminent pandemic of mental health issues, it is also essential to have (constant) dialogue between multiple stakeholders to talk about mental health. This will involve the help of medical practitioners, public officials, civil society organizations, pressure groups, media agencies, schools, parents, and even the adolescents themselves, she added.

The session was concluded by remarks from Dr Dalbir Singh, President, Policymaker’s Forum for Mental Health.

Launched in 2021, The Policymaker’s Forum for Mental Health aims to bring together diverse stakeholders under one umbrella and seek attention of policymakers from different political parties to evolve Action Plan and suggested recommendations for the formulation of a Concerted Strategy for the prevention of suicides. The Forum is guided by eminent domain experts and practitioners in creating the necessary evidence-based data.