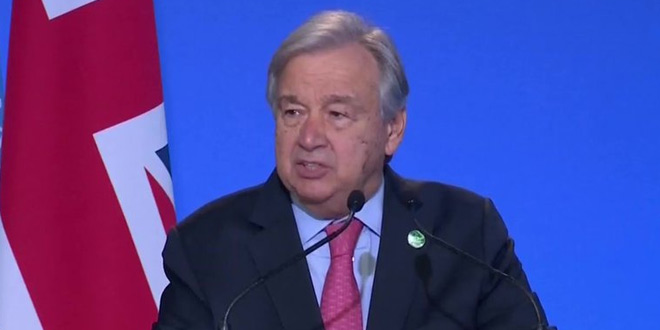 New Delhi: As the World’s Leader Summit opened on day two of COP26, UN chief António Guterres sent a stark message to the world. He took the podium with a blunt message, he said, “our addiction to fossil fuels is pushing humanity to the brink. We are digging our own graves.” Mr Guterres also highlighted that the six years since the Paris Climate Agreement have been the six hottest years on record.

“Either we stop it or it stops us,” he added, delivering five key messages to world leaders.

UN Chief António Guterres said, “Enough of brutalizing biodiversity, killing ourselves with carbon, treating nature like a toilet, burning, and drilling and mining our way deeper. We are digging our own graves.”

He added that our planet is changing before our eyes – from melting glaciers, to relentless extreme weather events. He highlighted that sea-level rise is double the rate it was 30 years ago, that oceans are hotter than ever, and that parts of the Amazon Rainforest now emit more carbon than they absorb.

“Recent climate action announcements might give the impression that we are on track to turn things around. This is an illusion”, he stated, referring to the latest report on national plans to reduce emissions, known as Nationally determined contributions (NDCs), which indicates that even when fully met, the result would still condemn our world to a “calamitous” 2.7- degree increase. He added,

And even if the recent pledges were clear and credible – and there are serious questions about some of them – we are still careening towards climate catastrophe. So, as we open this much anticipated climate conference, we are still heading for climate disaster

2. Keeping The 1.5 Degrees Goal In Focus

The UN chief also called for greater ambition on mitigation and immediate concrete action to reduce global emissions by 45 per cent by 2030. He said,

G20 countries have a particular responsibility as they represent around 80 per cent of emissions. We need maximum ambition – from all countries on all fronts – to make Glasgow a success.

3. We Must Protect Vulnerable Communities

The UN Chief said that over the last decade, nearly four billion people suffered climate-related disasters. He added that the devastation will only grow. Mr. Guterres highlighted that adaptation measures work, and that early warning systems as well as climate-smart agriculture and infrastructure, save lives and jobs. He added,

All donors must allocate half their climate finance to adaptation. Public and multilateral development banks should start as soon as possible.

4. COP Must Be A Moment Of Solidarity

Reiterating his call for a $100 billion per year climate finance commitment in support of developing countries, to become a reality, the UN chief said,

Mr. Guterres warned that we are fast approaching tipping points that will trigger escalating feedback loops of global heating, but investing in the net zero, climate-resilient economy, will create feedback loops of its own — virtuous circles of sustainable growth, jobs and opportunity. He concluded by saying,

On behalf of this and future generations, I urge you: Choose ambition. Choose solidarity. Choose to safeguard our future and save humanity.