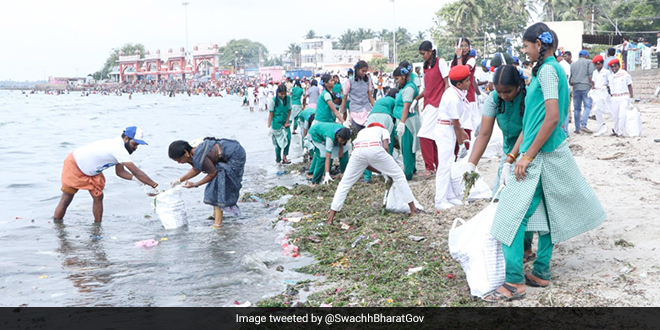 New Delhi: ‘Indian Swachhata League’, an inter-city competition with the spirit of cleanliness and resolve towards ensuring garbage-free beaches, hills and tourist places in the country, started on Saturday (September 17), a statement said. ‘India Swachhata League’ started with ‘Swachh Amrit Mahotsav’, a fortnight of activities from September 17 to October 2 to galvanise action around ‘swachhata’ (cleanliness), it said. The activities are being organised by the Union Housing and Urban Affairs Ministry.

According to the statement, the day began with whole-hearted participation and presence of highly motivated youth teams rallying for garbage-free cities.

Trap shooter R Prithviraj Tondaiman, the ambassador of Trichy Rockers, led from the front to keep his city clean, it said.

The ministry said the best teams of this youth-led competition will be chosen by an independent process involving jury members of national repute.

The evaluation will be on the basis of scale of participation, uniqueness of the activity and impact of cleanliness initiatives. It is expected that the mission will trigger participation of youths by indulging in action for sanitation, waste management and cleanliness, it said.

Temperature Expected To Go Up By 2.2 Degrees Celsius By 2050 In Assam