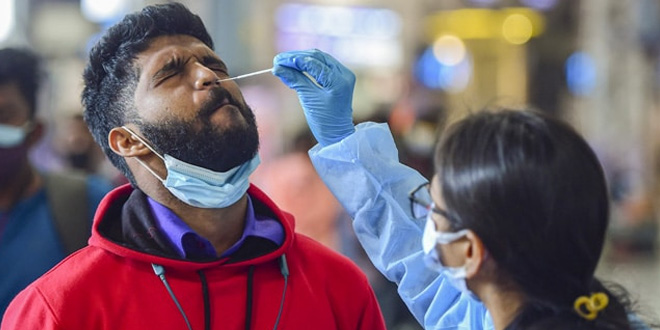 XE is a "recombinant" which is a mutation of BA'1 and BA.2 Omicron strains

Mumbai: The first case of XE, a more transmissible COVID-19 variant, was detected in Mumbai on Wednesday, a civic health official said. A case of the Kappa variant was also detected during a sero survey, the official said, adding the results came in genome sequencing of 376 samples, the 11th batch of testing in the local genome sequencing lab. As per the survey, Omicron variant was found in 228 out of 230 samples (99.13 per cent cases) from Mumbai, he said. The genome sequencing of 376 samples was conducted at the municipal Kasturba Hospital’s Genome Sequencing Lab.

The condition of the patients infected with the new strains of the virus was not serious, the official said.

Mumbai on Tuesday reported 56 COVID-19 cases, which is a three-fold rise from the addition to the tally a day earlier, taking the infection count here 10,58,185, a civic official said.

The official said the XE mutant appears to be 10 per cent more transmissible than the BA.2 sub-variant of Omicron. So far, BA.2 was deemed to be the most contagious of all the COVID-19 variants.

The XE variant is a mutation of the BA.1 and BA.2 Omicron strains, referred to as a “recombinant”.

As per the initial studies, the XE variant has a growth rate of 9.8 percent over that of BA.2, also known as the stealth variant because of its ability to evade detection.

The World Health Organization has said the latest mutant may be more transmissible than the previous ones.

World Health Day 2022: Walking The Tightrope Between Health Of The Environment And Human Health