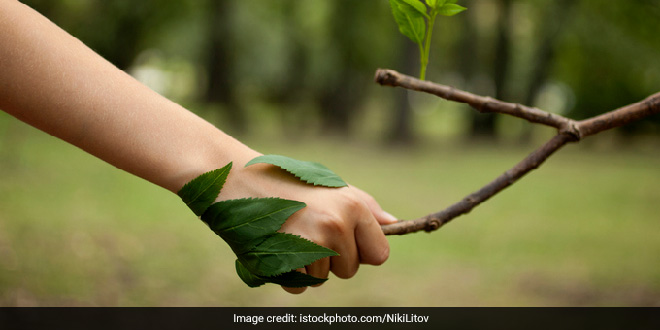 New Delhi: ‘Only a Swachh India can be a Swasth India,’ with this overall objective, NDTV and Dettol’s Banega Swasth India Campaign has been raising awareness regarding the link between the health of the planet and its link with human health and well-being, through its theme One Health, One Planet, One Future. This year, World Health Day which is observed on April 7 every year, is also highlighting this crucial link with the United Nations (UN) choosing ‘Our Planet, Our Health’ as this year’s theme.

According to the World Health Organization (WHO), Healthier environments could prevent almost one-quarter of the global burden of disease. It further explains that 24 per cent of all global deaths are linked to the environment, which is roughly 13.7 million deaths a year.

Clean air, a stable climate, adequate water, sanitation and hygiene, safe use of chemicals, protection from radiation, healthy and safe workplaces, sound agricultural practices, health-supportive cities and built environments, and a preserved nature are all prerequisites for good health, says WHO.

Arun Krishnamurthy, Founder, Environmentalist Foundation of India further stresses on how human health is directly linked to that of the planet.

Contamination of water-air-soil and natural resources has an immediate effect on healthy living, life expectancy. Lung-Liver-Intestinal complications, new/drug resistant strains of microbes, stress and mental health are all associated in many ways to environmental damage. Healthy planet is possible, based on our life choices, our healthy living depends on a healthy planet, he tells NDTV.

Furthermore, climate change also adversely affects people’s health by causing heatwaves floods, and vector-borne diseases such as Dengue, Malaria, among others. At a broader level, climate change, loss of biodiversity, and land degradation indirectly impact human well-being by threatening the ecosystem, such as access to freshwater and food production. S N Tripathi, Professor at IIT Kanpur says that the only way forward in mitigating climate change is an adaptation to climate change.

Sustainable development in Anthropocene (the time during which humans have had a substantial impact on our planet) is the only pathway towards achieving environmental conservation while securing global human health. Adaptation to changing climate and altering the state of the environment will be key to healthcare in future.

When it comes to the problem of Air Pollution, WHO considers it as a public health emergency. Dr Maria Neira, Director of Department of Environment, Climate Change and Health explains that it is responsible for more that 7 million premature deaths every year. She also says that nine out of every 10 people around the world, particularly those living in cities, are breathing air that is not consistent with what WHO considers as good standards, according to its air quality guidelines.

Avinash Chanchal, Senior Climate Campaigner at Greenpeace India also tells NDTV that environmental crisis like air pollution in recent years has become one of the most critical public health issues.

Sunil Dahiya, Centre for Research on Energy and Clean Air (CREA) also tells NDTV that the quality of air and environment around us governs the health and economic well-being of citizens and societies.

A society suffering from pollution ends up having frequent hospital visits, work absent days, reduced work efficiency and chronic diseases leading to premature deaths, which ultimately leads to reduced or no contribution of the individual to the economic development of the society and, at times leading to economic burden on families and society at large.

Mr Chanchal further suggests how this can be fixed for a better future. He says,

When it comes to sanitation and hygiene and its impact on health of the people, Mr. Anurag Gupta, State Programme Director, WaterAid India explains how climate change affects these aspects.

Indian coastal state of Odisha and especially its coastal districts are frequent victims of catastrophic cyclones. Interruption of water, sanitation, and hygiene services as part of extreme weather events has huge consequences on the health, nutrition, education, and livelihoods of the populations. The most vulnerable to the impact of these conditions and natural disasters are the children. Poor access to sanitation facilities, inadequate handwashing and safe drinking water contribute significantly to childhood illness and death. Many more children suffer weakness and malnutrition because of parasites or infections, robbing them of the ability to attend school, receive an education and achieve their full potential in life. WaterAid India is working in Bhadrak district for constituting community resilience to build the community’s ability to withstand, adapt to and recover from recurring cyclones through resilient water and sanitation models. Key interventions include capacity building of community institutions on comprehensive disaster risk reduction and demonstration of resilient drinking water systems, sanitation facilities and stormwater management models. Enhanced resilience allows better anticipation of disasters and better planning to reduce disaster losses, he explained.

Resilient WASH infrastructure continues to provide drinking water and sanitation services in disaster and post disaster period. Capacitated communities are able to cope with the calamity, he further explained how these work.

On the other hand, a study titled “Climate change and infectious diseases: The solutions” says that climate change has been linked with the establishment and geographical expansion of zoonotic diseases.

Zoonotic diseases are defined as diseases or infections that are caused by viruses, bacteria, parasites, fungi or prions, and that can be transmitted between humans and animals. Some of the examples of zoonotic diseases include Plague, Coronaviruses like COVID-19, Rabies, Lyme disease, Ebola, Nipah Virus, among others.

Zoonoses account for 60 per cent of emerging infectious diseases and their significance in terms of global health is steadily increasing, the study adds.

The science is clear that if we keep exploiting wildlife and destroying our ecosystems, then we can expect to see a steady stream of these diseases jumping from animals to humans in the years ahead. Pandemics are devastating to our lives and our economies, and as we have seen over the past months, it is the poorest and the most vulnerable who suffer the most. To prevent future outbreaks, we must become much more deliberate about protecting our natural environment. says UNEP Executive Director Inger Andersen.

All evidence point to how the treatment of the planet by humans in turn affects their health and well being. As per WHO, while the COVID-19 pandemic showed us the healing power of science, it also highlighted the inequities in our world. The pandemic has revealed weaknesses in all areas of society and underlined the urgency of creating sustainable well-being committed to achieving equitable health now and for future generations without breaching ecological limits. Breaking these cycles of destruction for the planet and human health requires legislative action, corporate reform and individuals to be supported and incentivised to make healthy choices, it adds.

World Health Day 2022: Experts Speak On The Solutions India Should Focus On To Fix The Ignored Tribal Healthcare Sector