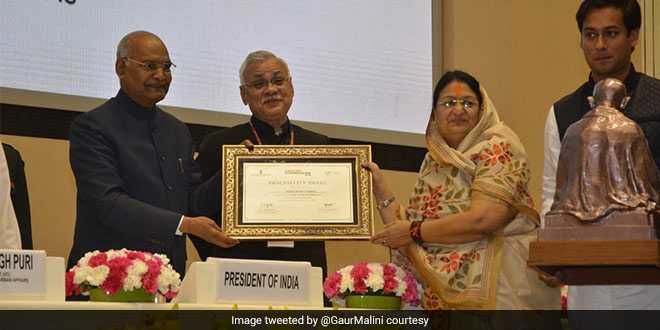 New Delhi: India got its cleanest cities today as President Ram Nath Kovind announced the results of Swachh Survekshan 2019. Indore for the third time in a row was declared as India’s cleanest city followed by Chhattisgarh’s Ambikapur and Karnataka’s Mysuru. Speaking at the award ceremony of Swachh Survekshan held in New Delhi, President Ram Nath Kovind congratulated Indore and Indore-wasis (Indore residents) for their swachh contribution over the years, he said, “Indore City has set an example by acquiring the first prize in all the surveys so far. I thank the citizens of Indore along with the authorities, who have performed the work on the ground and helped spread the word about Swachh Bharat Mission.”

Highlighting the importance of the Swachh Survekshan, President Kovind added,

I am told that the ‘ clean-up ‘ survey is the world’s largest survey of its own way. Through this survey, we have collected the participation of 64 lakh citizens and have gathered useful information concerning sanitation efforts for an urban population of around 40 crore.

This time the Swachh Survekshan 2019 assessed 4,237 cities of India and 62 Cantonment board in a record time of 28 days.

Further emphasizing on the fact how India is moving in the right path of cleanliness, President Ram Nath Kovind talked about Kumbh 2019 that concluded recently, he added,

The vastness of Kumbh 2019 and the way it has been planned is being appreciated across the country, even internationally; Kumbh is being lauded for swachhata and sanitation facilities. The number of travellers coming to the world’s largest temporary tent city, Kumbh Nagri was almost 25 crores. The provision of nearly one lakh twenty thousand toilets was made there, along with the provision to manage waste. I am confident that by learning from this year’s Kumbh, the organizer of big gatherings will focus more on the lines of Swachh Bharat Mission.

Urging people to continue their contribution towards Swachh Bharat Mission, President Ram Nath Kovind signed off with a message,

Many people pay great attention to individual cleanliness, cleanliness of their home, but remain indifferent to public cleanliness. This mindset needs to be changed. To strengthen the roots of swachhata, the culture of hygiene has to be an integral part of the life of citizens. There should be a sense of pride in people about keeping their surroundings clean. Today, our nation is progressing at a right pace and we are confident that India will be able to achieve its Clean India target by October 2, 2019. Our nation has paid the best tribute to Mahatma Gandhi by making cleanliness a mass movement.

Move Over Fossil Fuel Cars! Here Is An Electric Super Car, Faster Than Formula 1 To Drive You On To The Future