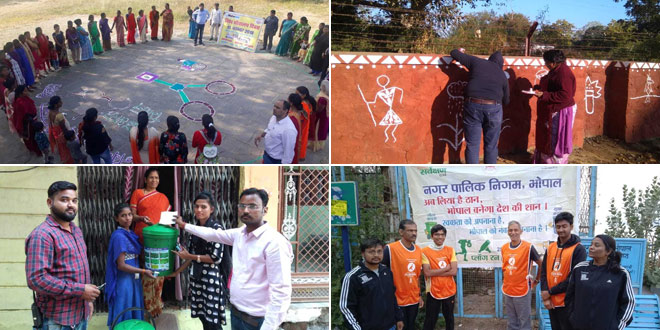 New Delhi: Bhopal the capital of Madhya Pradesh had been ranked the second cleanest city of india for last two years slipped to 19th rank this year in the all India ranks, but won the ‘Cleanest Capital City’ title in the Swachh Survekshan 2019. Ministry of Housing and Urban Affairs (MoHUA) has been conducting Swachh Survekshan (cleanliness survey) every year since 2016 to evaluate the performance cities in achieving the cleanliness standards under the Swachh Bharat Mission.

Hardeep Singh Puri, Union Minister of State in MoHUA congratulated the citizens on Bhopal and posted this message on his social media account,

Bhopal is back on charts. This time as India’s cleanest Capital/UT in Swachh Survekchan 2019. The way the citizens of Bhopal have turned Swachh Bharat Mission into a hugely successful Jan Andolan never ceases to impress and inspire me. Congratulations.

Bhopal is back on the charts. This time as India’s cleanest Capital/UT in #SwachhSurvekshan2019

The way the citizens of bhopal have turned Swachh Bharat Mission into a hugely successful Jan Andolan never ceases to impress & inspire me. Congratulations. pic.twitter.com/ywNhuwwpZB

But despite winning a title the dip in overall rank is a bit of bummer for the city which has been competing hard with Indore for the last two years for the number one spot.

The overall ranking of the city has fallen because it was the election year in the state and being the capital city the focus had to be shifted to conducting the elections. Most officials and implementing agencies had to take up multiple responsibilities which has somewhere hampered the city’s performance.

Appreciating the efforts and cooperation received from the residents of the city, Mr. Dubey said,

The citizens of Bhopal have become very well aware of that keeping the city clean is a duty and there is a visible change in behaviour towards matters of cleanliness. We have more than 200 community and public toilets across the city and people now prefer to use these instead of relieving themselves in the open. People have also played an important role in reducing the use of single-use plastic and disposables.

Bhopal became Open Defecation Free (ODF) in 2017 and attained the ODF plus plus (ODF ++), in December 2018 ensuring an overall sanitation coverage and fecal and solid waste management.

– Bhopal Municipal Corporation (BMC) has built 41, 985 individual household, 153 public and 51 community toilets and has ensured each of these have water facility.

– BMC conducts door-to-door garbage collection in all 85 wards and has added 150 auto-tippers for the same. It has introduced 4 mechanised street sweeping machines as well to promote dust free sweeping.

– Waste reduction and decentralised composting have been taken up in the past year to reduce the burden on city’s landfills. For this, 20,000 home composting units have been established in which 50 tonnes of kitchen waste gets deposited for composting everyday. Five waste to energy biogas plants have also been established to manage the waste of the city. This has also contributed in making Madhya Pradesh the best performing state in Solid Waste management.

– Multiple initiatives have been taken to sustain clean Bhopal through public engagement like conducting ‘grah-gate varta’ (doorstep discussions) with people to raise awareness about sanitation and hygiene, conducting talks at schools, and organising other awareness building programmes.

– Local administration of Bhopal has also made efforts to make the city ‘Disposable Free’ to reduce the use of single-use plastic through citizen engagement.

– Being the city of lakes, Bhopal local bodies are also focussing on cleaning the water bodies in the city by cleaning drains which flow into these lakes.

– Other efforts including beautification of sidewalks, city walls, round abouts, and four-ways have also been taken up by Bhopal’s urban local bodies