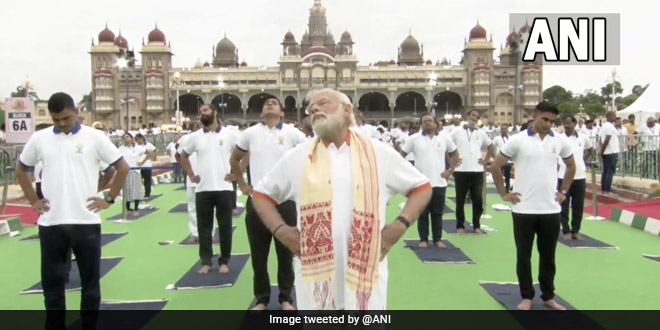 New Delhi: “Yoga is no longer a part of life, but is becoming a way of life”, said Prime Minister Narendra Modi while leading the country’s Yoga Day celebrations from Mysuru. The eighth International Day of Yoga is being celebrated today (June 21) in India and across the world with the theme of ‘Yoga For Humanity’. Prime Minister Narendra Modi is leading the Yoga Day celebrations from Mysore Palace grounds in Karnataka while 75 other ministers are joining him from 75 iconic locations.

While addressing the nation on International Yoga Day, PM Modi spoke about the thought behind this year’s theme and said, “Yoga has now become a global festival. Yoga is not only for any individual, but for the entire humanity. Therefore, this time, the theme of International Day of Yoga is – Yoga for humanity.”

International Day Of Yoga 2022: Top 5 Quotes By PM Modi On The Importance Of Yoga

Also Read: International Yoga Day: WHO Regional Director Highlights That Yoga Is For All Since It Has Helped Millions Of People Globally

Prime Minister Narendra Modi today performed yoga at Mysore Palace grounds as part of the eighth edition of the International Day of Yoga. Over 15,000 people participated in the celebrations along with the PM including Karnataka Governor Thaawarchand Gehlot, Chief Minister Basavaraj Bommai, Union Minister for Ayush Sarbananda Sonowal, among other officials.

Going with the overarching theme of the 75 years of India’s independence, the Ministry for Ayush identified 75 heritage and iconic locations for Union Ministers to participate in the Yoga Day celebration.

Prime Minister’s Yoga programme at Mysuru is also part of the novel programme ‘Guardian Yoga Ring’ which is a collaborative exercise between 79 countries and United Nations organisations along with Indian Missions abroad to illustrate Yoga’s unifying power that surpasses National boundaries.

International Yoga Day 2022: The Importance Of Yoga For The Mind, Body and Soul

Medical Experts Warn People, Casual Attitude Is The Reason Behind The Spike In Covid Infections In West Bengal