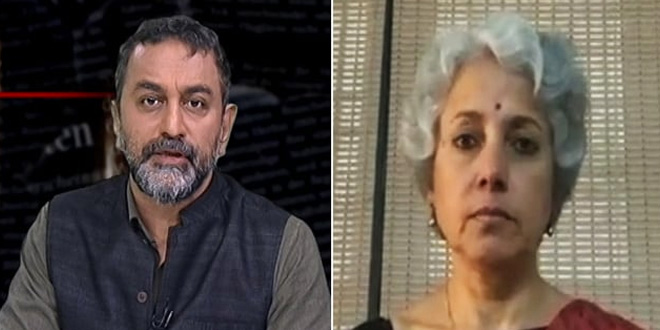 New Delhi: According to the World Health Organization (WHO), 77 countries across the world have reported cases of Omicron variant of coronavirus which was detected first in South Africa last month and is spreading across the globe at a rate not seen with any other previous variant. India has also detected over 120 cases of Omicron so far with highest number of cases being reported from the state of Maharashtra. To learn about the Omicron variant that is becoming a dominant strain across the world, what is causing its surge and the threats associated with it, NDTV spoke with Dr Soumya Swaminathan, Chief Scientist, WHO.

While talking about the rising cases of the new variant across the world, Dr Swaminathan stressed that it is natural for viruses to mutate and spread. However, she added that this time, it was in the hands of the people of the world to prevent the Omicron wave. Emphasising on the importance of vaccination, she said that the world had tools to stop the new variants from spreading but were not used properly. She said,

It was in the world’s hands to prevent this, if we had used the tools that we have equitably around the world. We had enough vaccines to vaccinate people around the world. Perhaps we could have reduced the chances of this happening.

She further added that what went wrong in handling the pandemic by countries across the world can be described in many ways, including vaccine nationalism. She said,

I think every country’s leaders wanted to protect their own people. But in a pandemic, you also have to keep this in mind that if you are not protecting people around the world, the virus is going to change and come back in a different variant.

Dr Swaminathan said that two years into the pandemic, the world has enough knowledge to be able to quickly understand what is going on and update and strengthen the public health measures along with vaccination. She highlighted that there are few weeks to prepare before the surge starts hitting many more countries. She said,

Looking at what is happening right now in Africa and other places, we can anticipate what may happen in the coming weeks. The growth rate of Omicron variant is very fast. We are seeing an exponential rise in cases. This is what we have to prepare for. Once the virus enters the community, of course we will try to contain it but the chances are that cases will continue to rise. This variant also has a 20 per cent high risk of causing reinfections.

According to scientists, while the Omicron variant is highly contagious, it has so far been seen as a milder strain in terms of the disease caused by it as compared to the Delta strain that caused the second coronavirus wave in India earlier this year. This has been indicated by the smaller proportion of cases requiring to put on Oxygen support and ICU (Intensive Care Unit) so far in South Africa and other countries with surging cases of Omicron. Dr Swaminathan highlighted that majority of people who were admitted to ICU were unvaccinated. Currently, only about 26 per cent of people in South Africa are vaccinated.

Younger people are getting more infected, maybe because they are more out and that could be another reason for milder illness. Also, a lot of these people have been exposed to the previous strain because of which there is some pre-existing immunity that is contributing to milder infections. But once the variant reaches the vulnerable population that has not built any immunity, then it might be a lot different from what we are observing now.

According to Dr Swaminathan, because of the number of mutations that Omicron variant has, it is able to evade the immune response generated by natural infections or vaccines, so reinfections are becoming much more common.

If we look at the protection provided by vaccination to people who are fully vaccinated, it has come down but, protection against hospitalisation is still high, as per the data that we have so far. This is critical. We can be happy that vaccines are still providing some protection but on the other hand, we see that vaccine efficiency is coming down. The vaccine protection does go down with time but should last at least for six months. This is why many countries are now going for booster doses. But we need to think about how to protect our most vulnerable population through vaccines and other measures of protection, she said.

The virus neutralising antibodies decline in about 10 weeks of taking booster dose. However, it is believed that the T-cell responses and the cellular immunity is likely to last longer. Apparently, the mutations on Omicron have not affected the cellular immunity as much. So, that is a good news because that is the immunity that protects against severe disease.

Dr Swaminathan added that people above the age of 70 years may need a booster dose. She said,

As one gets older, their body is not able to produce strong immunity. So, they may require a booster dose to increase the immunity and to make sure that they are again prepared to face the infection and fight it with their own immune responses. So, people with high risk, might do well with booster.

The emergence of the new strain has caused concern across the world and countries has issued fresh set of guidelines for travelling and imposed restrictions to curb the spread. The United Kingdom has already witnessed one death from Omicron. Leaders and experts across countries have warned of another difficult wave of infections in the coming days.

Omicron Effect: How The National Capital – Delhi Is Preparing To Fight The New COVID-19 Strain