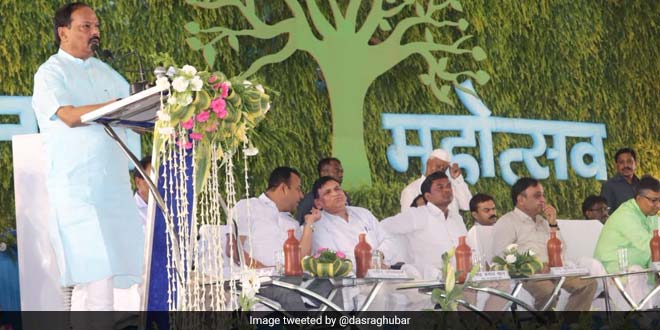 New Delhi: Recognising that water, forests and land are the true treasures of the state, Jharkhand began a massive tree plantation drive on July 2, hopeful that the plantation of trees will keep a check on the problems of soil erosion and environmental pollution in the state. Titled as ‘Nadi Mahotsav’ the state’s tree plantation campaign was kicked off by Chief Minister Raghubar Das, who inaugurated the plantation drive at the banks of the Subarnarekha river. The campaign is scheduled to go on for a month till August 2, and an astounding nine lakh saplings were planted on day one.

Addressing the crowd gathered for the inauguration of the ‘Nadi Mahotsav’, Chief Minister Raghubar Das spoke extensively on the importance of trees and their impact on environment and ecology. Mr Das said that since the formation of his government in Jharkhand, tree plantation campaigns have become an annual affair, to ensure that the green cover of the state is not compromised. Appealing to the people, the Jharkhand CM said that the state government was making tree plantation a people’s movement by encouraging more people. The Chief Minister also asked people to plant more trees across all villages in the state, and transform Jharkhand into a greener, cleaner and healthier state.

Trees have played a vital role in both science and spirituality. From an economic point of view, trees are very important. By planting trees like Sal, Sagwan and Teak, we can ensure that future expenditure is kept in check, said Chief Minister Raghubar Das.

The Chief Minister said that the state will aim to increase the state’s forest cover to 35,000 hectares by the next three years, up to 39 per cent from where it is today. The types of trees to be planted across the state will be such that people will also benefit economically from them. Over 750 villages in the state will be directly associated with this initiative. Over 5,000 villages have become beneficiaries of tree plantation drives, as many villages are following sustainable economic models, courtesy the growing number of trees. The government is hopeful that increase in forest cover will see a growth in economic models based on forest produce such as fruits, flowers, timber and herbs. The state is also encouraging and supporting small entrepreneurship initiatives based on forest resources.  The Chief Minister said that the state’s Micro Entrepreneurship Board has been instrumental in providing support to forest based small businesses, and will continue to do so.

Forest produce has been an integral part of Jharkhand, and an increase in forest cover will only boost the state’s economy. Increase in forest cover will see an increase in the generation of products like raw wood, fruits and medicinal herbs. Increase in the generation of such raw materials, which are fit for global export, will see forest produce related entrepreneurship grow as those involved in such businesses will make significant profits. The Jharkhand government will particularly benefit by encouraging entrepreneurship among its tribal population, as regular plantation of trees will ensure that the state’s green cover is not compromised with.

Also Read: Taking A Green Lead, Ahead Of Van Mahotsav, Gujarat Forest Department Ditch The Use Of Plastic Pots