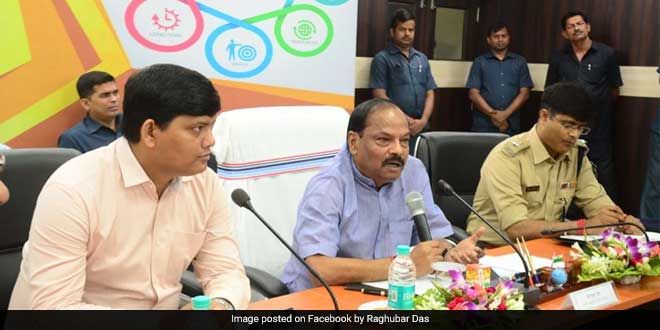 New Delhi: Maintaining cleanliness across Jharkhand and providing clean drinking water to its three crore residents is now the state government’s top priority. Jharkhand Chief Minister Raghubar Das while chairing a Corporate Social Responsibility review meeting said that the government is now focusing on improving the quality of life by providing safe sanitation, cleanliness and safe drinking water, which will help reduce incidents of waterborne diseases such as cholera, diarrhoea and dysentery, to name a few.  The Chief Minister further stated that the corporate social responsibility council has decided to spend one percent of CSR funds on the water and sanitation related initiatives.

Chief Minister Raghubar Das took to Twitter and highlighted that providing clean drinking water to every household is the priority of the state government.

According to an official of the state’s Drinking Water and Sanitation department, the entire state population does not have access to sanitation facilities and safe drinking water, and a lot of work in these areas needs to be done.

Three and half years ago, the status of sanitation in Jharkhand was very dismal, with only about 18 percent households having access to sanitation in the rural areas and the balance defecating in the open. But with the state government’s swachhta related efforts, the sanitation status improved and now stands at 78.13 percent (with the construction of over 26 lakh (26,01,747) household toilets) with over 13 thousand villages and around 1800 panchayats have got the coveted tag of open defecation free (ODF). In the coming few months, we will complete the target of 100 percent sanitation coverage, highlighted the official.

The Chief Minister hopes to achieve 100 percent sanitation coverage by relying on the strength and support of women, who contributes towards constructing toilets at home. Notably, the government has recruited over a lakh masons to accelerate the toilet construction activities in the state. He urged the people to come forward and make the state ODF. “To make cleanliness a state priority, there should be coordination between the government and the society. The importance of public cooperation is important,” Mr Das added.

In terms of providing safe drinking water to everyone in the state, where only 30 percent inhabitants have access to clean water, the Secretary of Drinking Water and Sanitation Aradhana Patnaik said:

To provide safe drinking water to everyone, we have initiated water supply projects worth Rs. 772.64 crore.

Furthermore, to curb water pollution so safe drinking water can be provided to people, Jharkhand Chief Minister Raghubar Das, who described rivers as “places of worship”, also asked factories and industrial units to take measures to prevent the pollution of river waters.