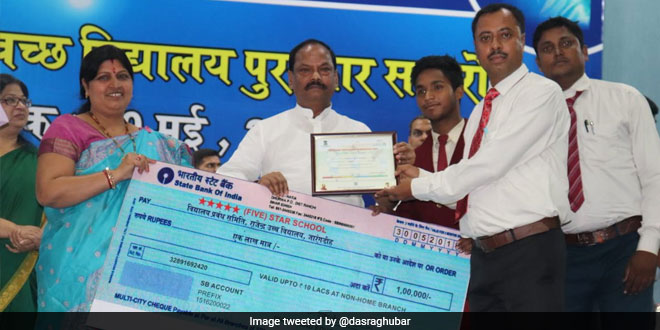 New Delhi: When the Swachh Bharat Abhiyan was launched in 2014, the campaign focused not only on improving the status of sanitation in individual households, but also in schools and public spaces. Sanitation in schools was taken up as a priority as more than 2 lakh schools in the country were without adequate toilet facilities for its students, resulting in early dropouts. As the Swachh Bharat Abhiyan has progressed, the sanitation scenario in India’s schools has improved as over 4 lakh toilets have been constructed in schools. Jharkhand has prioritised sanitation in schools and has ensured that adequate toilets are built for students in the state’s government schools.

212 government schools in Jharkhand have achieved the 5-star ranking in sanitation, and were felicitated by Chief Minister Raghubar Das on May 30 at the Swachh Vidyalay Awards Ceremony. The schools have been successful in implementing a comprehensive WASH (Water, Sanitation and Hygiene) strategy, which ensures that students have access to clean toilets, safe drinking water and wash their hands after using the toilets. In 2016-17, only seven schools in the state had received the 5-star ranking, but a year later, the number has gone up drastically to 212. The Chief Minister tweeted that the remarkable achievement of the state’s schools in implementing a culture of Swachhata was in sync with Prime Minister Narendra Modi’s vision of a clean India. The Jharkhand CM also hoped that the school students responsible for maintaining cleanliness in their respective school toilets will take forward the message of Swachhata to their neighbourhoods and motivate others.

The Chief Minister said that clean toilets were instrumental towards development of children and the state. The state aims to achieve the 5-star ranking for all 38,000 schools. Jharkhand will also receive the ‘Skoch Order of Merit Award’ for outstanding performance in improving urban sanitation. The state will receive the award for improving community toilets, Google toilet locators and reserve vending machines. At Swachh Survekshan 2018, Jharkhand was awarded the honour of being India’s best performing state with open defecation free (ODF) areas and voluntary citizen participation.