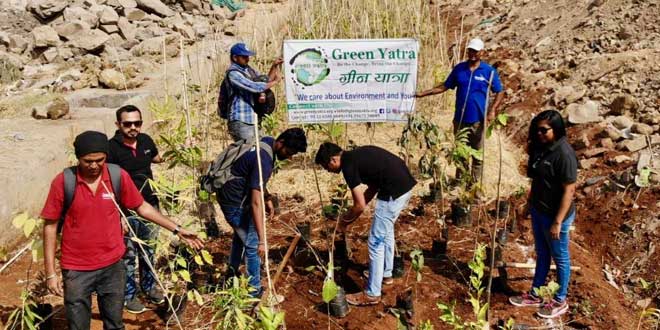 New Delhi: Mumbai’s concrete jungle expands defiantly at the cost of green cover, which is currently at a mere 13 percent as against the 33 percent recommended by Ministry of Environment, Forest, and Climate Change. The bigger challenge that a city like Mumbai faces is lack of empty spaces to convert into forest. Green Yatra, a Mumbai based NGO, that is on a mission to plant 10 crore trees by 2025 across India. Their target for 2019 is to plant 10 lakh trees. But in case of Mumbai they were facing issues of availability of land for tree plantation and that is when they decided to resort to Miyawaki plantation method.

In Miyawaki method of tree plantation, saplings are planted close to one another and support each other in growth. This also blocks sunlight from reaching ground which prevents weeds from growing and keeps the soil moist.

The only direction they receive sunlight from is the top because of which saplings move upwards instead of growing sideways. This makes the saplings grow tall in very less time, says Pradeep Tripathi, founder of the Green Yatra.

Using Japnese technique of plantation, Green Yatra has created Mumbai’s first Miyawaki urban dense forest at CRWC (Central Railside Warehouse Company Ltd) premises at Jogeshwari East. At CRWC in Mumbai, over 12,000 trees are being planted in a stretch of one km. In the first leg of the project, team has planted 3000 trees of 30 different native species.

We created a three feet deep trench by digging out soil and after testing soil fertility, we added indigenous materials like rice straw, vermi compost, biomass compost, coco peat, husk, hay, and effective microorganisms. We mixed everything and created a plantation bed. Three to five saplings are planted per square feet. 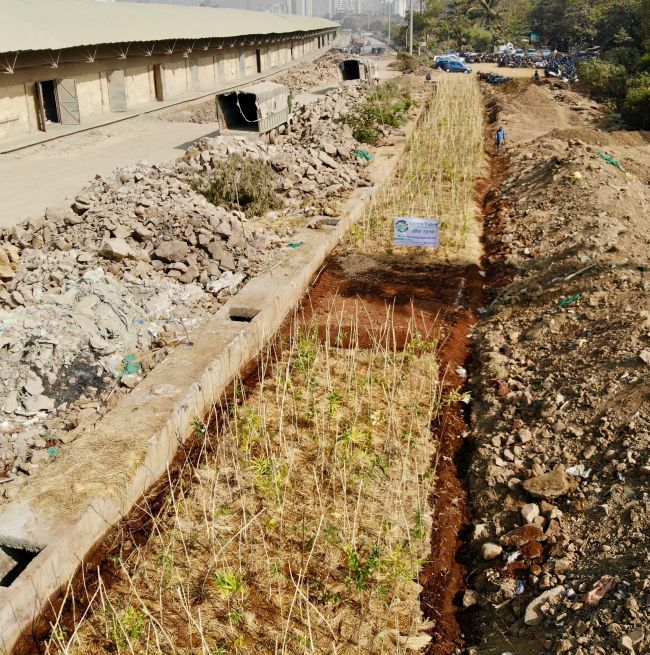 As part of tree plantation at CRWC, multi-layered two to three feet tall saplings are planted very closely. While the first layer which has shrubs grow up to ten feet, the second layer having sub-tree grows up to 25 feet, the third layer of trees grow up to 25-40 feet and the last layer of canopies grow beyond 40 feet.

Further explaining the advantages of the Japanese technique, Pradeep says,

Miyawaki is an innovative plantation method invented by Japanese botanist and plant ecology expert Dr. Akira Miyawaki. The Miyawaki method of creating forest produces rich, dense and efficient protective pioneer forest in 20 to 30 years, as opposed to traditional forest that would need 200 to 300 years. Forests grown under Miyawaki method grow 10 times faster and 30 times denser. They have 30 times better carbon dioxide absorption capacity, 30 times better noise and dust reduction, 30 times greener surface area, as compared to a monoculture plantation. So, we get 100 per cent native, organic and 100-year-old forest in just 10 years.

The best thing about Miyawaki forest is that after two years of plantation, they don’t need any kind of maintenance. Along with aiding in green cover and curbing air pollution, dense forest retains more groundwater, recharges groundwater table and supports local bio-diversity.

The Miyawaki method is a unique ‘potential natural vegetation’ concept, proven to work worldwide, irrespective of soil and climatic conditions. Using this methodology, over 3,000 forests have been successfully created worldwide.

Having done this, Green Yatra team plans to create more such urban dense forests across Mumbai and Maharashtra.