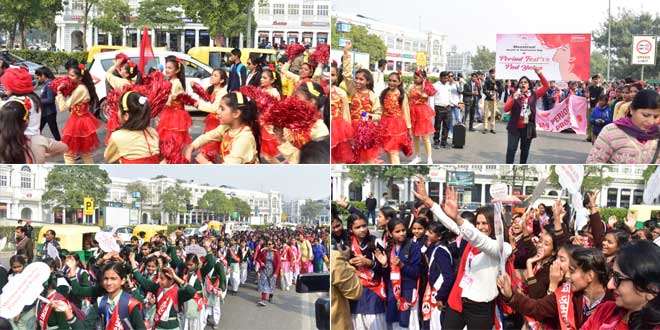 New Delhi: To eliminate the shame and taboo around menstruation and to spread awareness about menstrual hygiene, a Period Fest was held at the Central Park and Pad Yatra (march) in the inner circle area of Connaught Place in Delhi on Tuesday, February 5 which is celebrated as ‘Menstrual Hygiene Day’. Over 8,000 students and teachers from 55 government and private schools participated in the fest and the march. The March was flagged off by Deputy Chief Minister Manish Sisodia who motivated the students to spread awareness about menstruation at their homes, neighborhood, and schools. He said,

I urge each one of you to become brand ambassadors of this message to eradicate shame and silence around periods. You are here to bring about change in the nation.

The fest and the march were organised by a Delhi-based NGO (Non-Government Organisation) called Sachhi Saheli, which is working to end the stigma around menstruation. The aim of the fest was to provide the participants an understanding about women’s health, ways to manage periods, and sexual and reproductive health. For this, various activities were held in the fest including games, plays, mime, rangoli competitions, live paintings, Q and A, and discussions. 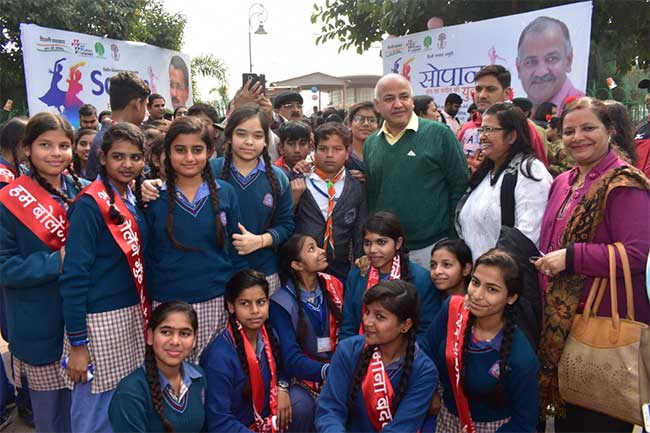 Dr. Surbhi Singh, Gynaecologist, President of Sachhi Saheli and one of the organisers of the fest said,

We aim to break taboos through this fest and make periods positive for young girls. We ought to bring change in the mindset of young boys too. We need to educate our upcoming generation about the natural process which is deemed as bad in many households. Menstruation is a reality for almost half the population of the world and yet it is kept as a secret. We want that the girls should proud of their periods and never use ‘code words’ for their periods. 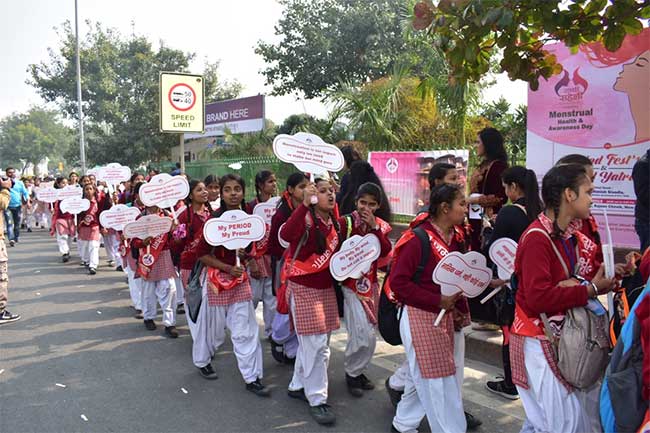 There are numerous myths related to menstruation that say that girls should stay in their rooms, not touch the pickle, not dance, exercise or attend school. These myths, according to Dr. Singh are still extremely prevalent in urban slums, semi-urban and rural settlements. Busting these myths, Dr. Singh said,

Period was made a taboo in the past when our ancestors did not have the period management methods like pads, tampons, menstrual cups and cloths. They did not even wear stitched clothes and used to tie their clothes around their bodies. Because there were no stitched garments to hold a pad/cloth, there were no pads/ clothes to manage the period blood. Thus the blood used to drip on the floor which after getting in touch with air caused bacteria to grow and spread infections. When the women used to go for a bath at common places due to lack of individual toilets, the stagnant water of that pond used to get contaminated making people bathing in it fall sick. These infections and sickness made people think that a woman during her period is a bad omen and isolated her during menstruation. 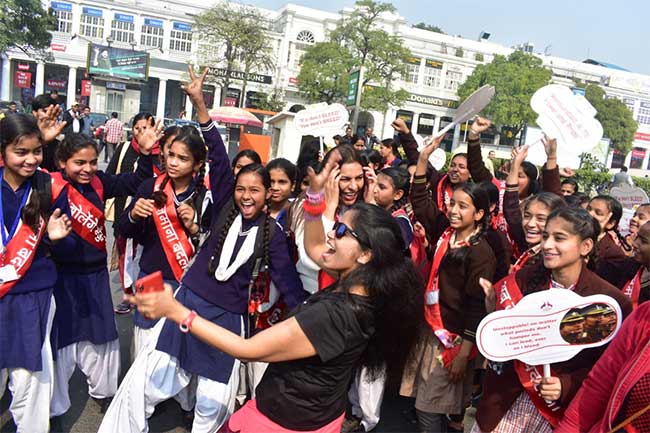 “Hum bolenge, muh kholenge, tabhi zamana badlega (When we will speak out and only then will the society change)”, said the participants who took an oath of changing the attitude of people about menstruation

She further said that while these myths separated women from others during periods, they helped in saving many lives in the past which lacked sanitary and medical facilities like today. She said,

What seemed to be helpful then is very foolish now. People need to leave these practices of discriminating against women in their periods and move on. Girls should talk about it openly about their periods and the family members should feel shy discussing menstruation. It is important to normalise menstruation for young girls in their homes and among their peers. 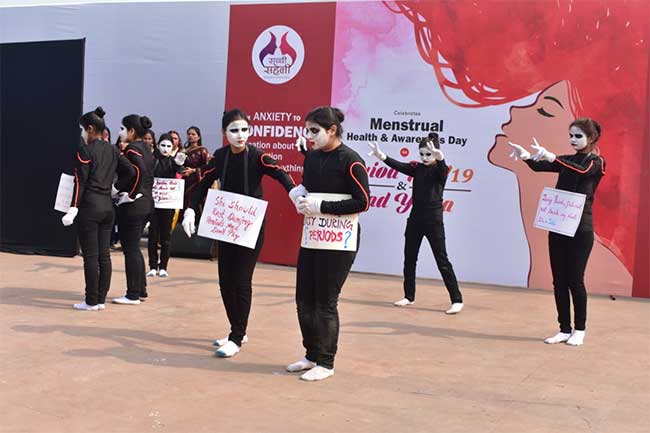 The participants were provided with information on improved menstrual products during the fest. Special question and answers round were conducted to clear confusions and misconceptions regarding menstruation among the young girls and boys. The doctors from Delhi Medical Associations answered queries related to Polycystic Ovarian Disease (PCOD), Menstruation and sexual and reproductive health. Dr. Singh said,

The young girls were introduced with menstrual cups and were encouraged to ditch the sanitary pads as not only the cups are comfortable, they also help in eliminating the waste generated by the pads. 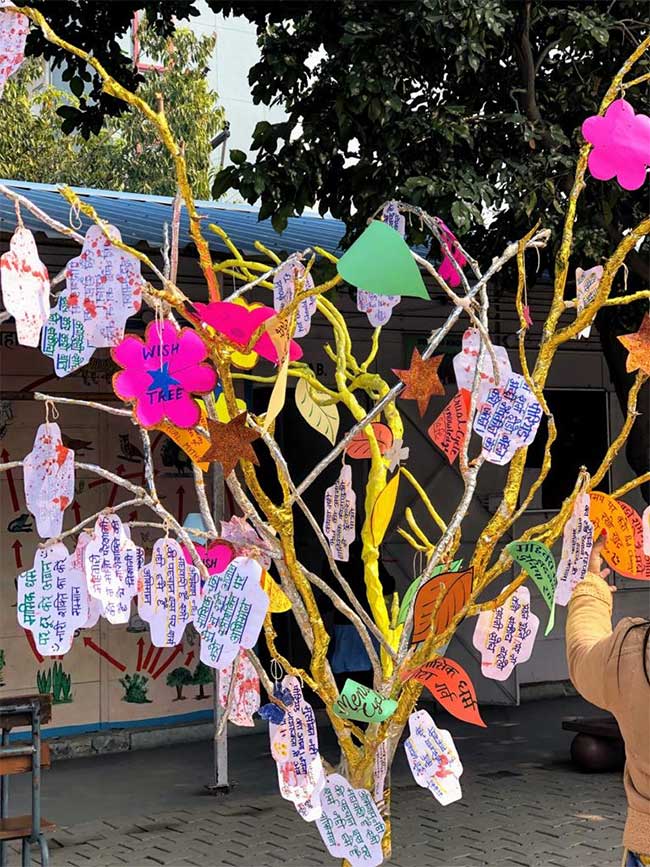 Representatives from NGOs working on menstrual health and hygiene conducted various interactive activities for the youth and the women to impart important information on adolescent and sexual health.

Apart from the knowledge imparting discussions and lectures, there were fun games themed on menstruation and painters painted live for the participants. The students of Delhi Government Schools, NDMC Schools, and private schools gave cultural performances. The Asmita Theater Group performed a thought-provoking street play titled ‘Vo Din’ for the audience to show the routine and experience of women during the days when she is on her periods.

Related Topics:
Delhi Menstrual Hygiene In India Menstruation
Up Next

Airpocalypse III: A Tale Of The Air Quality Of Indian Cities And The Efficacy Of National Clean Air Programme