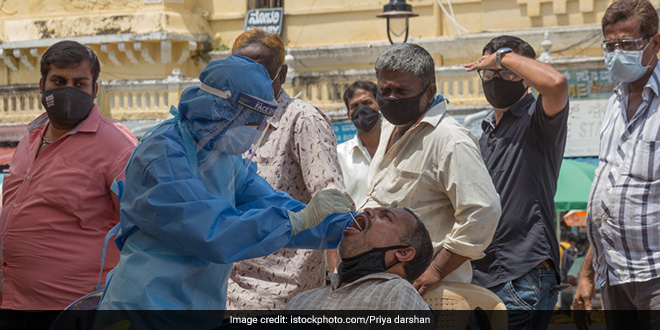 Covid death count may be three times higher than official Covid-19 records, according to a study

London: India’s estimated cumulative excess deaths due to COVID-19 between January 2020 and December 2021 were the highest in the world at 4.07 million, around eight times higher than reported, according to a new analysis in the Lancet.
Responding to the findings, the Union Health ministry on Friday termed the analysis “speculative and misinformed” and said the authors had themselves admitted to several methodology flaws and inconsistencies. The study takes into account different methodologies for different countries, the ministry said in a statement. For India, for example, data sources used by the study appear to have been taken from newspaper reports and non-peer reviewed studies, it said.

This model uses data of all cause excess mortality (created by another non-peer reviewed model) as an input and this raises serious concerns about the accuracy of the results of this statistical exercise,\ the ministry said.

The Lancet reported on Thursday that excess mortality rates due to Covid among Indian states are not the highest in the world, because of India’s large population, but the country accounted for around 22·3 per cent of global excess deaths as of December 31, 2021.The paper estimates excess mortality from the COVID-19 pandemic in 191 countries and territories from January 1, 2020, to December 31, 2021.

Although reported COVID-19 deaths in that period totalled 5·94 million worldwide, the Lancet paper estimates that 18·2 million people died worldwide because of the COVID-19 pandemic, as measured by excess mortality, over that period. This is around three times higher than previously estimated.The documented deaths due to Covid in India over that period stood at around 4,89,000, the journal says in the paper Estimating excess mortality due to the COVID-19 pandemic: a systematic analysis of COVID-19-related mortality, 2020-21. Excess mortality measures the additional deaths in a given time period compared to the number usually expected and is not dependent on how COVID-19 deaths are recorded.

For India, empirical assessment of excess mortality for 12 states used data from the civil registration system. For different months during the first and second waves of the COVID-19 epidemic in the 12 states in India, total numbers of deaths for those states during the corresponding months were made available, the peer-reviewed paper reports.

Strengthening death registration systems around the world, long understood to be crucial to global public health strategy, is necessary for improved monitoring of this pandemic and future pandemics. In addition, further research is warranted to help distinguish the proportion of excess mortality that was directly caused by SARS-CoV-2 [COVID-19] infection and the changes in causes of death as an indirect consequence of the pandemic, it states.

According to the Health ministry, the methodology adopts data from newspapers at varied intervals to extrapolate (without any scientific basis) for the total period under study. The pandemic had multiple surges during the period and varied trajectories across different states (sub state level also) at any point of time. Hence the methodology used by this study is less than robust, it said.

Quoting issues as sensitive as death, that too during an ongoing global public health crisis like pandemic COVID-19, should be dealt with facts and with required sensitivity, the ministry added. This type of speculative reporting has potential to create panic in the community, can misguide people and should be avoided, it said. Last month, too, India dismissed previous reports of alleged under-reporting of COVID-19 deaths in the country, with the Health Ministry asserting that it has a robust mechanism in place.

Based on globally acceptable categorisation, government of India has a comprehensive definition to classify COVID deaths which has been shared with the states who are following it. Union Health Ministry has also regularly emphasised the need for a robust reporting mechanism for monitoring district wise cases and deaths on a daily basis. Therefore, to project that Covid deaths have been under-reported is without basis and devoid of justification, the ministry said in a statement last month. On Friday, India’s Covid toll climbed to 5,15,714 (5.15 lakh) with 255 fresh fatalities, according to ministry data. India logged 4,194 new coronavirus infections, taking the total tally of COVID-19 cases to 4,29,84,261.

Two Years Of COVID-19 As A Global Pandemic, Here’s What Experts Say On Way Forward