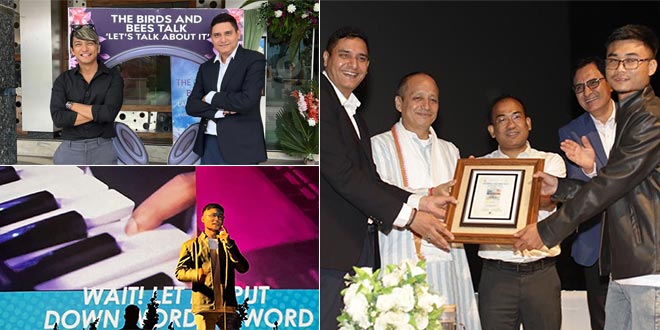 New Delhi: “We could spend a lifetime loving but first let me get protection. No harm in talking about it” – these are the lyrics of the song ‘Protection’ sung by Rahul Rajkhowa. Protection is one of the four songs launched as part of India’s first music album on growing up ‘Let’s Talk About It’ by The Birds and Bees Talk, a program about growing up and life skills. The Birds and Bees Talk (TBBT) programme led by Reckitt and implemented by PLAN India marked its entry into the third year through a music album that promotes the five core principles of the programme – Inclusion, Awareness, Consent, Equity and Protection.

The music album was launched in Manipur, on June 14, in the presence of Th. Basanta Singh, Minister, Education, Law and Legislative Affairs, Government of Manipur. While speaking with NDTV at the launch event, Mr Singh congratulated Reckitt for sensitising adolescents and youth on topics like consent and reproduction which are considered taboo and are not discussed at home by their parents. Further talking about the role of music in education, he said,

This entertainment style education helps in grabbing the attention of the students in a big way and I am sure, that this will go a long way in contributing to the interest that the children will have in such kind of talk that is the ‘birds and bees talk’, which is very important for their growing up stage, particularly the adolescent stage.

The aim of the music album is to channelise the energy of adolescents and youth in a direction that builds empathy, helps in taking positive and informed decisions and to reach out confidently. Through catchy tunes, the four songs look to empower children aged 10-19 years with critical information that promotes healthy behaviours to grow into responsible, healthy adults. The songs stress on having a ‘conversation’ and ‘normalising’ the conversation around sexual and reproductive health.

“It’s time we give the talk. Special talk, awkward talk. Open, honest, shame free. Confess your jitters. Break the ice, it’s perfectly normal” – are the lyrics of the song The Really Special Talk by The Whoop.

When it comes to having conversations around sexual and reproductive health, one of the common concerns is that sexuality education leads to early sex and deprives children of their ‘innocence’. The Really Special Talk highlights the same with its lyrics – “Knowledge about sexuality does not spoil innocence. A ride in the car, well it’s time to chat.”

Also Read: In Season 8, We Are Taking A 360° Approach To Include All: Ravi Bhatnagar

In an interaction with NDTV, Rahul Rajkhowa, Vocalist and Guitarist said that the album is an effort at sensitising the youth and the current generation on topics of sexual health, inclusion, body positivity, and the entire plethora of how we address gender inequalities and sexuality. Rahul, who is also a teacher talked about the music as a tool of education and said,

I deal a lot with Gen Z and I can tell that they don’t like stuff that is too preachy. They don’t like being told what to do in a manner that’s not fun. You need to make it exciting for them so that they can process the knowledge better. This album has fun songs and they are extremely groovy and catchy.

Mohammed Asif, Executive Director, PLAN India the album resonated with the importance of music, art and culture as effective mediums to connect to children, young adults and youth. He said,

With The Birds And Bees Talk song album, we intend to utilise rich cultural heritage of North East India and promote local music artists and composers to spread correct messages on growing up and provide a platform to ‘Let’s Talk About It’.

The Birds and Bees Talk programme is an initiative that is making Comprehensive Sexuality Education (CSE) a part of the school curriculum and helping young boys and girls to navigate through adolescence and puberty.

We leave with you some lyrics from the song ‘Birds And The Bees’ by Chungneihao Doungel – “Here I bring a little recipe – awareness for wellness, consent for adolescent, equity for prosperity, inclusion and protection. Ride with me with the birds and the bees to spread love and care for young generation.”

Related Topics:
Adolescent Sexual Health Leaving No One Behind Reckitt’s Commitment For A Better Future
Up Next