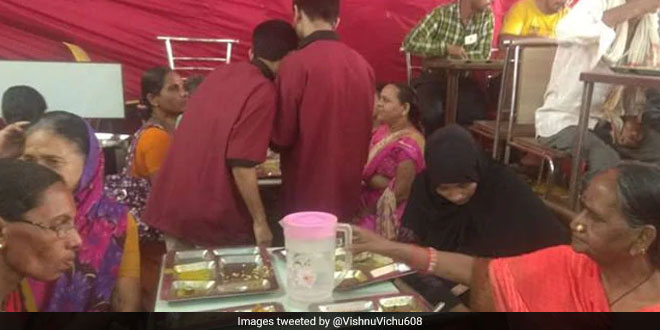 Mumbai: The Maharashtra government’s economical Rs. 10 ‘Shiv Bhojan’ thali sells virtually like hotcakes. In the past 17 days, it has been lapped up by 2,33,738 hungry customers at 139 distribution centres, averaging to 13,750 meals per day, an official said here on Wednesday. The ‘Shiv Bhojan’ thali, launched on January 26, is now attracting hordes with queues seen outside many of the centres around the state during the lunch hours.

Starting with 11,300 plates on the inaugural day, within the first week of launch, the number of customers shot upto 1,05,887 and since then it has more than doubled till February 11, said the official.

Monitored personally by Chief Minister Uddhav Thackeray, the emphasis is on maintaining quality control, cleanliness and the best quality of food for the needy people.

To ensure proper implementation, Thackeray engaged in video-conferencing with many customers in the initial few days after the affordable meal scheme was launched.

While discussing his pet scheme, the CM sought their reactions on the food quality, service and sought their suggestions to further improve upon, and people responded very positively. The official said,

Many customers appreciated the food quality, service and offered blessings to the CM for satisfying the hunger of the poor people at an affordable Rs. 10 per plate.

The ‘Shiv Bhojan’ centres have started in public places like outside district government hospitals, railway stations, bus stands, government offices, and market places where the poor and needy flock daily.

The ‘Shiv Bhojan’ comprises a bowl of rice and dal, a vegetable, 2 chapatis, and a dessert. Each thali costs the government Rs. 50 and Rs. 35 in urban and rural centres respectively, which has been subsidized for the poor people who can avail of the meal for only Rs. 10 a plate.

Seeing the tremendous response from the pilot project, the government teams are now working to implement it on a much larger scale across the state, said the official.

Manual Scavenging: 376 Die In 5 Years, Only Half Of The Families Given Compensation, Minister Informs Lok Sabha