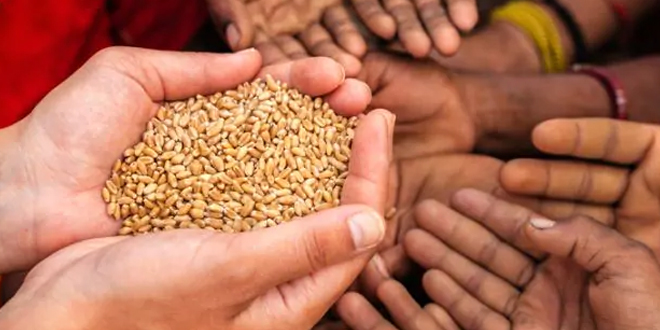 New Delhi: In India, more than 19 crore people, which is about 14.5 per cent of the total population, are undernourished or consume an insufficient amount of calories, as per ‘The State of Food Security and Nutrition in the World, 2019′ report of FAO (Food and Agriculture Organization). To address the grim state of food intake in the country and combat the problem of hunger, the Department of Food and Public Distribution, Ministry of Consumer Affairs, Food and Public Distribution has started ‘one nation, one ration card’ facility in 12 states in the country on the first day of 2020. According to Rakesh Kumar Pandeer, Under Secretary, Department of Food and Public Distribution, the facility will be extended to the rest of the country by June this year. He said,

‘One nation, one ration card’ scheme has been started in Andhra Pradesh, Telangana, Gujarat, Maharashtra, Haryana, Rajasthan, Karnataka, Kerala, Madhya Pradesh, Goa, Jharkhand and Tripura on January 1 this year. The facility will be implemented in all states in the country by June 2020.

Further explaining about ‘one nation, one ration card’ system the official said that it is an electronic ration card portability scheme to make a single ration card eligible at any fair price shop also known as ration shops across the country. Currently, ration card holders can avail their entitlement of subsidised foodgrains in the place of issue of the card. Under the new system, the beneficiaries under the Public Distribution System (PDS) from these states can get their share of rations in any of the 12 states irrespective of where the ration card was originally issued. After the scheme gets implemented at the national level, any PDS recipient can use their ration cards at any PDS shop across the country.

According to Kamal Tak, a social activist and member of Soochna Evam Rozgaar Abiyaan, a non-governmental organisation in Rajasthan, ‘one nation, one ration card’ system will be beneficial for the migrant workers (especially, mine workers, farm labourers and construction workers) who travel to other states with their families in search of livelihood or people with transferable employment. As per Census 2011, 4.1 crore people were inter-state migrants and 1.4 crore people migrated (inter and intra-state) for employment. Mr. Tak who has been working in various villages and urban slums of Rajasthan said,

Geographical location is one of the hindrances that migrant workers face in order to claim their quote of grains. With the implementation of ‘one nation, one ration card’, we can hope that there will be some relief to them.

However, he pointed out that mandating Aadhar linking under the system can be problematic. This is because everyone may not have Aadhaar cards and also sometimes, the fingerprints of people engaged in construction labour and domestic work may change or fade and may not match with the ones entered in Aadhar, he said. In case of a mismatch of the bio-metrics, ration shop dealer can deny foodgrains to the beneficiaries.

PDS was started in India in 1947 to distribute food items to the poor at subsidised rates. Later in 2013, it was revamped and strengthened with the enactment of the National Food Security Act, (NFSA) 2013, Mr. Pandeer informed. Under NFSA, the government is obliged to give subsidised foodgrains every month to the beneficiaries identified by each state government on the basis of the economic status of households.

Implemented in all states and Union Territories, PDS is currently covering about 81.35 crore persons identified by each state government via more than 5 Lakh ration shops across the country, as per the estimates of the Department of Food and Public Distribution.

While PDS has helped in ensuring food security to the people belonging to AAY category or the poorest of the poor, experts say that there are still a large number of people who are left out of PDS like those who are constantly migrating, for example, the nomadic tribes, or those who do not have their Aadhar cards linked with their ration cards. They also say that weak monitoring at the ration shop level is a major concern and recommend that social audit which measures the performance of a programme in the community must be done regularly.

According to experts, the country is currently far from ending hunger by 2030. It should be noted that the Sustainable Development Goals Index 2019-20 recently released by National Institution for Transforming India (NITI Aayog) show that the country as a whole is performing very poorly on targets under SDG 2: Ending hunger by 2030. The NITI Aayog found a sharp fall of 13 points – from a score of 48 marks in 2018 to 35 marks in 2019. This means that the country has performed poorly in 2019 as compared to 2018 in working towards achieving SDG 2. The analysis of NITI Aayog highlights that the fall in the aforementioned score has happened due to the lag in the efforts in 10 states – Andhra Pradesh, Assam, Haryana, Himachal Pradesh, Karnataka, Tamil Nadu, Telangana, Tripura, Uttarakhand, and West Bengal. All these states were performing better in the previous year. The report says that the reason for the decline in 2019 as compared to 2018 is due to the increase in stunting (low height for age) among children under five years of age in these states along with a slight decrease in the efficient implementation of PDS in rural areas.