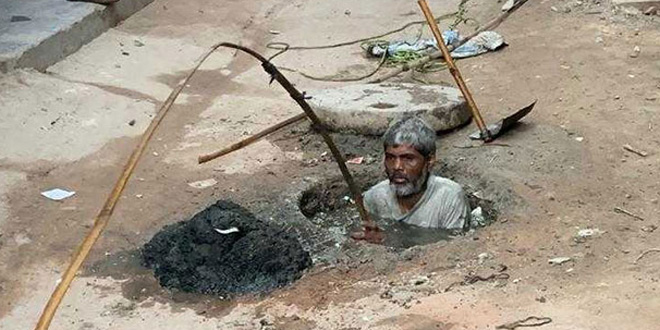 New Delhi: Union Ministry of State for Social Justice and Empowerment, Ramdas Athawale, in a reply to a question raised in the Lok Sabha revealed that as many as 376 people died of asphyxia while cleaning sewers and septic tanks in the country in the last five years. According to the data presented by him in his reply, the number of deaths was the highest in 2019 (110) which is almost a 62 per cent increase from the number of deaths reported in 2018, which stood at 68. 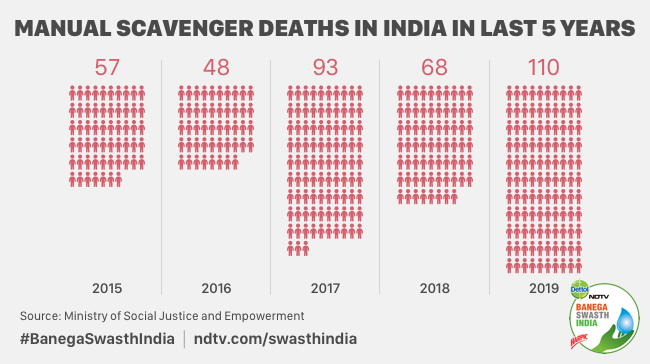 376 manual scavengers have died in the last five years

He said that Uttar Pradesh has topped the list of sewer deaths last year at 21, followed by Maharashtra (17), Gujarat (16) and Tamil Nadu (15). The shared by Mr. Athawale also sayas that 13 states including Odisha, Jharkhand, northeast states and Union Territories Andaman and Nicobar Islands, Dadra and Nagar Haveli, and Lakshadweep have reported zero incidents of manual scavenging deaths. 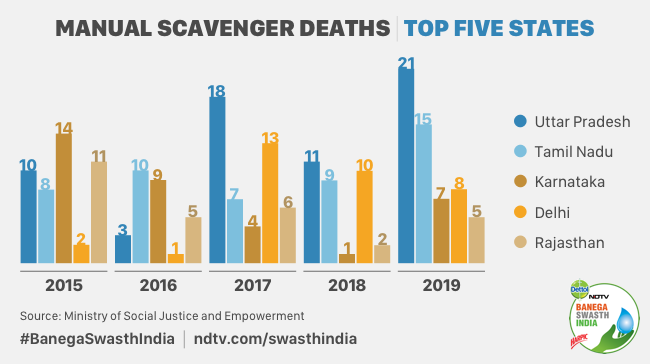 The state of Uttar Pradesh has topped the list of sewer deaths last year followed by Maharashtra, Gujarat and Tamil Nadu

Out of 376 deaths, families of only 200 sanitation workers who died between 2015 and 2019 were paid full compensation, 75 received partial amount and 101 have not received any compensation at all.

The Minister, in his reply, said that persons who were engaged in manual scavenging have been identified for their rehabilitation. He said,

‘Numbers Revealed By Ministry Are Not True’: Safai Karamchari Andolon

According to Bizwada Wilson, co-founder of the Safai Karamchari Andolon, a non-governmental organisation that works for the eradication of manual scavenging said that manual scavenging is still the primary occupation of lakhs of people across the country but the government has identified only a few thousands of them.

He further said that the data shared by Mr. Athawale in the Lok Sabha on the number of people who died while cleaning of sewer and septic tanks is also not correct. According to him, 475 manual scavengers have died in the last five years and 116 have died in 2019. While talking to NDTV, he said,

This is an extremely sad situation. Nearly seven years after the legislation of the ‘Prohibition of Employment as Manual Scavengers and Their Rehabilitation Act (Manual Scavengers Act) 2013,’ deaths of sanitation workers due to asphyxiation inside sewers and septic tanks continue across India. I can only say one thing – the government is not taking this matter seriously. They are not reporting the numbers properly. For them, these deaths are not important and are just some numbers.

The Government Is Strictly Against Hiring Of Manual Scavengers: National Safai Karamcharis Finance And Development Corporation

According to an official from National Safai Karamcharis Finance and Development Corporation (NSKFDC) which is the implementing agency for the scheme on the rehabilitation of manual scavengers, government agencies at all levels have been given strict instructions to not hire manual scavengers. However, he did acknowledge the fact that sometimes the contractors who take up government work and private entities like Residential Welfare Associations (RWAs) and individuals do hire people to clean sewers and septic tanks. He said that any such act, if reported to them, faces strict actions. According to him, the 2013 Act says that people employing manual scavengers could be convicted with imprisonment for up to two years or fined Rs. 1 lakh or both.

He further added that sanitation is a state subject and all state governments along with the central government, are trying to identify the manual scavengers and provide them training for alternate occupations to help them rehabilitate.

Recently, while delivering her budget speech, Finance Minister Nirmala Sitharaman announced that the government is determined to eradicate the practice of manual cleaning of sewer systems or septic tanks through mechanised cleaning.

Hand Hygiene Can Reduce Spread Of Coronavirus At Airports