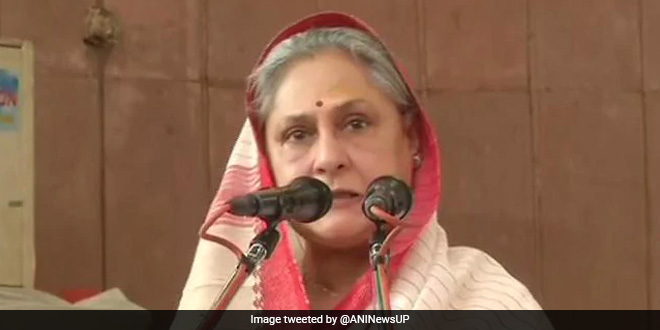 New Delhi: Actor turned Politician Jaya Bachchan talked about manual scavenging practices in India in Rajya Sabha on Tuesday and asked the Centre to address this issue on an urgent basis. The Samajwadi Party MP said “Continued practice of manual scavenging is an embarrassment for the country. It is a pity that today we are still talking about the deaths due to manual scavenging.”

Why have we not done away with manual scavenging yet and not been able to provide protector gears to them when we talk about progress in other areas. We are talking about going to the moon, Mars and everywhere and yet we cannot provide the basic protective gears to these people.

She also appealed to the Centre to look at this issue on an urgent basis and provide a response. Ms Bachchan added,

We need to punish the contractors who do not provide them with proper gears.

This is not the first time the Bachchan family has put the issue of manual scavenging in India to the forefront. Last year, even Amitabh Bachchan took to his social media to speak about the issue. Back in October he said, “Manual scavenging is an unconstitutional and illegal act. Yet it exists and that work, suffer in human existence…Will join any campaign that works for their benefit, have pledged.”

Mr Bachchan, previously, during Banega Swasth India campaign telethons had also spoken about the issue at length. In last year’s 12-hour #SwasthyaMantra telethon held on October 2, Mr Bachchan said that manual scavenging was put to an end on papers back in 2013 but on ground the situation has not changed much. Sharing a personal experience, Mr Bachchan said,

The Plight Of Manual Scavenging In India

The act of manual scavenging is banned in India, yet as per the Population Census 2011, manual scavenging is the primary occupation of over 1.8 lakh Dalit families. According to the data collected by Safai Karamchari Andolan (SKA), about 1,760 people have died because of manual scavenging in the past 20 years. SKA’s estimates show that over 7.7 lakh workers have been sent into sewers since 1993 with complete knowledge and awareness of the dire consequences. There are nearly 26 lakh dry latrines across the country where humans are employed for cleaning excreta to earn their bread and butter.

To stop the practice of manual scavenging in India, the Central and the State governments have been taking steps that includes amending the Employment of Manual Scavengers and Construction of Dry Latrines (Prohibition) Act, 1993 and enforcing a new Act, Prohibition of Employment as Manual Scavengers and their Rehabilitation Act, 2013. The act provides for identification of the manual scavengers and rehabilitation them by providing skill training to them and enabling them to find alternative means of livelihood.