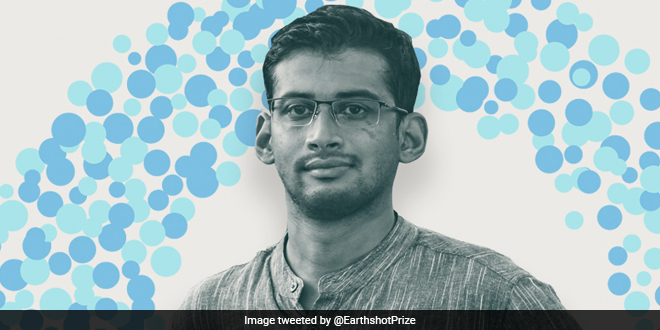 New Delhi: 30-year-old Vidyut Mohan from Delhi lives through smoke and pollution and braves it every winter like fellow Delhiites. But what differentiates Mr Mohan is his innovation that could be a potential solution for two problems – reducing air pollution and reusing agricultural waste for creating fuel. Mr Mohan, co-founder and CEO of a social enterprise Takachar has developed a small-scale, low-cost and portable equipment that can process agricultural and forest waste like rice straw, rice husk, coconut shells, into a carbon dense material which can be used to make various bio-products like fuel and fertiliser.

Earlier this year, Mr Mohan’s innovation ‘Takachar’ won Earthshot Prize, launched in October last year and inspired by the US president John F. Kennedy’s “Moonshot” project in the 1960s to put a man on the moon. Takachar received ‘Clean Our Air’, one of the five awards and a million pounds.

Mr Mohan got the opportunity to present his innovation at the 26th Conference of Parties (COP26) currently underway in Scotland’s Glasgow and met Prime Minister Narendra Modi at the Climate Summit.

Talking to NDTV about the idea and inspiration behind the novel innovation, Mr Mohan said,

Either I or my grandparents or someone in the family would often fall sick due to the toxic air. When data actually started coming in on what contributes to air pollution, it was quite shocking to see that the burning of agricultural waste contributes quite significantly. Being a biomass technologist, this rings very close to home so that’s what inspired me to work on this.

An Innovation That Can Be A Game Changer For Air Pollution

Farmers often burn crop residue to clear farmland for the next set of crops. Stubble burning in neighboring Punjab, Haryana and Uttar Pradesh is one of the major causes of severe levels of air pollution in Delhi-NCR. Mr Mohan’s innovation, low-cost portable equipment, can be deployed on farmland or mounted on tractors to utilise the same agricultural waste. It takes about a day to set up the machine which uses the principle of a coffee roaster. Waste roasted in controlled temperatures can produce fuel, fertilisers, and other products for use in agricultural land.

Our hypothesis is that you need to have decentralised equipment that avoids transportation of agricultural waste over long distances because these are very bulky and voluminous materials and logistically it is very difficult and expensive to transport these. We think if there are small-scale, decentralised solutions that are located closer to these wastes, not only is it more economically viable but also brings the value creation process closer to farmers by incentivising them to not burn waste. The idea is to cut pollution, create livelihood opportunities in rural communities and a circular economy – converting farm waste into fertiliser and selling it to the farmers.

Takachar’s technology claims to eliminate over 95 per cent of smoke compared to open biomass burning or biomass-induced wildfires. It can mitigate 700 million tons/year of carbon dioxide equivalent emissions by 2030 and also increase the net income of rural communities by 40 per cent by creating a market for crop residues.

The Future Of Takachar

The endeavour is to put a full stop to stubble burning. For the same, the team has started a pilot project in Haryana where rice straw is being used. Sharing more details, Mr Mohan said,

We will be conducting the pilot over a year and see how we can develop a scalable model in this region to utilise these rice straws productively. We do have a couple of pilots running right now in Northern and Southern India, using different kinds of agricultural waste. The plan now is to lay solid foundations in those pilots so that we are able to develop a replicable model and use that to scale across these regions. Our aim is to scale this solution as soon as possible. It is for that we have won Earthshot Prize. We cannot do this alone and the government can play a big role and private corporations can work with us so that sustainability in the value chain can be brought about.

Mr Mohan said that he wants Takachar to be the go-to company for agricultural residue management. While signing off, Mr Mohan gave the message of working together to solve the problems surrounding us. He said,

Everyone can make an impact.