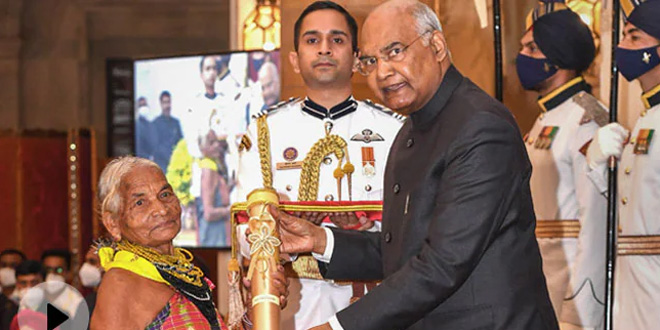 New Delhi: On Monday, President Ram Nath Kovind conferred Padma Awards to 119 eminent personalities at a ceremony in Rashtrapati Bhavan. The 2021 list of Padma Awards included a 72-year-old tribal woman from Karnataka, Tulsi Gowda. She was presented the award for her contribution to the protection of the environment. Barefoot and dressed in traditional attire, Tulsi Gowda received India’s fourth-highest civilian award from President Ram Nath Kovind during a ceremony in the national capital.

Tulsi Gowda belongs to the Halakki indigenous tribe in Karnataka, she grew up in a poor and disadvantaged family. Even though, Tulsi Gowda never received any formal education, yet, today she is known around the world as the ‘Encyclopedia of the Forest’ with ‘endless knowledge’ about plants and herbs.

Born to a poor family, Tulsi Gowda lost her father when she was two. At a very young age, she started working with her mother at a local nursery in Karnataka. Later, Tulsi Gowda joined the forest department as a temporary volunteer, after she worked for over 30 years, she was offered a permanent job in the department because of her dedication to nature preservation. She retired after 15 more years at the age of 70. Tulsi Gowda has worked for the cause of environment for over six decades and has planted more than 30,000 saplings.

President Kovind presents Padma Shri to Smt Tulsi Gowda for Social Work. She is an environmentalist from Karnataka who has planted more than 30,000 saplings and has been involved in environmental conservation activities for the past six decades. pic.twitter.com/uWZWPld6MV

The veteran environmentalist received the award barefoot and won many hearts. On social media, a photo of Tulsi Gowda greeting Prime Minister Narendra Modi, top ministers and dignitaries at the function was widely shared. The PM also posted the image on Instagram.

Many on social media captioned it the “Image of the Day”.

In the world of propagandists, be a real change agent.

Tulsi Gowda, true pride of mother India ????
In the last 6 decades, she has planted more than 30,000 saplings and has been involved in environmental conservation.
Our Govt has recognized a true gem, congratulations #TulsiGowda, on your Padma Shri award! #PeoplesPadma @MahaEnvCC pic.twitter.com/jg62WfPSYk

This year, Padma Awards list comprises seven Padma Vibhushan, 10 Padma Bhushan and 102 Padma Shri Awards, of which 29 awardees are women and one awardee is a transgender person. The Padma Awards have been presented in various fields, such as art, social work, public affairs, science and engineering, trade and industry, medicine, literature and education, sports, civil service and so on.