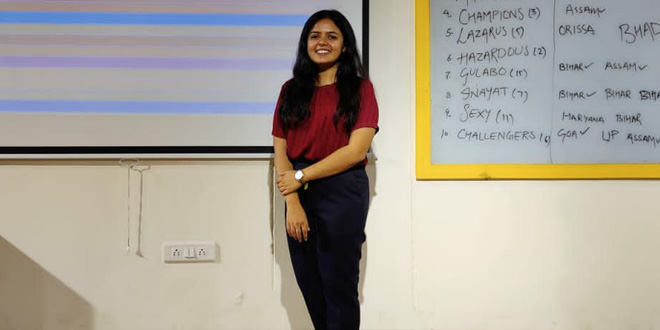 New Delhi: 26-year old Medha Priya, an architect & climate warrior has been fighting climate change by making green and sustainable buildings. She is also one of the 17 young leaders of United Nations ‘We The Change’ campaign that was announced recently ahead of COP26, the 2021 United Nations Climate Conference. The ‘We The Change’ initiative aims to showcase climate solutions pioneered by young Indians as a celebration of India’s climate leadership.

Medha Priya’s journey date backs to 2013, when the ‘Rana Plaza’ incident occurred in Dhaka Bangladesh. On 24th April 2013, an eight-story garment factory building called Rana Plaza collapsed in Dhaka, killing 1,132 and injuring more than 2,500 people. The collapse was attributed to poor construction, substandard building materials and disregard to construction codes. Speaking to NDTV about her journey, she said,

I had just completed my board examination when this incident took place. The incident was entirely preventable. At that age, I didn’t know anything about green spaces or sustainability, but all I knew was, someone has to make better spaces for people to live or work in and that was the beginning of my journey.

Medha followed her calling and graduated as an Architect in 2018. During the course, she realised how construction activities cause harm to the planet. She says,

37 per cent of greenhouse gases comes out of the construction activity. When I realised how polluting it is to the planet, I decided to work for the environment and help the country make greener infrastructures. I joined one of the sustainability consultancy in Delhi where I got the opportunity to look at the designs of the buildings, approve construction materials and convey strategies to maintain good working conditions for the workers.

What Are Green Buildings?

“A green building is basically a building that is designed or constructed in a way that it reduces or eliminates negative impacts, instead it creates positive impacts, on our climate and natural environment. There are a number of features which can make a building green. These include:

– Efficient use of energy, water and other resources
– Use of renewable energy, such as solar energy
– A building where waste management is done right
– The air quality indoors is good
– Buildings which are constructed using materials that are non-toxic, ethical and sustainable
– Buildings that are designed with a consideration for the environment
– A design that enables adaptation to a changing environment”

Medha Priya says that any building can become a green building, whether it’s a home, an office, a school, a hospital, a community centre, or any other type of structure, provided it includes the above listed features.

To become a self-sustaining unit, in aspects like energy, water, to name a few, the campus has been designed to aim for 5-star rating on the GRIHA framework which is the highest rating for green buildings in India. In order to save resources and energy the masterplan has been designed to incorporate the terrain within the design. Thereby, the main academic block in located in a concentrated precinct, allowing the flora and fauna to thrive and preserve the ecological system. Since the ground water report indicated a limited availability of water on site, special attention was given to harvest rainwater and capture surface runoff for groundwater regeneration. The landscape plan was developed to include green zones that act as sponges to absorb all the water falling on the site. Many ponds and waterbodies are also included for the same purpose. The campus also pays special attention to on-site renewable energy generation. The design IS proposed to harness solar power and wind power in order to head towards net-zero dependency on the grid. Apart from solar installations on the rooftops of the buildings, a separate area has been dedicated to install a solar farm. In the hostel blocks, solar heaters have been provided on the rooftops to reduce electricity consumption via geysers and to minimize the wastage of sewerage water, low flow dual flushing systems have been proposed.

Medha Priya says she wants to move ahead and design something which not just benefits few hundred people living in a building but can help as many people as possible. She says,

Now, I want to move towards designing solutions that will help people overall. I have now taken up my masters in Interaction Design at National Institute of Design and I will be working in that direction.

Apart from doing her bit towards the environment professionally, climate warrior Medha Priya has also been educating and motivating other college students with ‘ABC of SDGs’ classes. Medha Priya has been going to different colleges and schools every now and then only to talk about climate crisis the world is facing, sustainable development goals and the need to achieve them for a safe and better world. She thinks this kind of awareness is important and is not cover in the current curriculum.

The Role Of Young Leaders In Battling Climate Change

The role of young people is very important. We have grown up with the climate changes, for us all the things are happening in reality, we are the victims of the climate crisis. That is why, it is imperative that we stand up and take the responsibility to fight the crisis. It’s the need of the hour to become leaders of this problem. If we will not take the responsibility of the mess, then who will? Don’t think someone else will do this job, we should realise the importance of getting involved. If one person does his/her job and make small changes, it will benefit the whole community and that is what really matters.

Stressing on the fact that India is urbanizing at an incredible rate which provides exciting opportunities for sustainable development in the country, Medha Priya signed off by saying,

As infrastructure is an important sector for the overall development of any country, it is important to regulate and assess upcoming projects for their impact on the environment. We have been seeing a lot of climate changes happening around us – from Kerala floods to forest fires in Uttarakhand, many things are happening and it is time we do something about it. If it is not now, then it will never be.

Meet Archana Soreng, A Tribal Climate Warrior From Odisha Who Aims To Bring The Indigenous Wisdom To Climate Actions