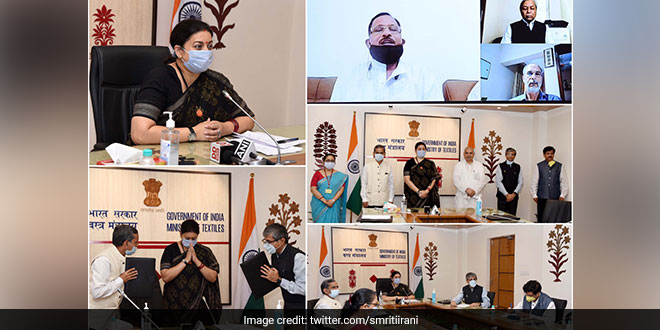 New Delhi: The Ministry of Women and Child Development (WCD) on Sunday (September 20) signed a memorandum of understanding (MoU) with the Ministry of AYUSH to join efforts to eradicate malnutrition in the country. Speaking at the event, Minister of State for AYUSH, Shripad Naik said that integration of the AYUSH Ministry and the Ministry of WCD would go a long way in eliminating malnutrition, which was one of the main reasons for infant mortality below the age of five.

Also Read: Poshan Maah 2020: Why Protecting Health And Nutrition Rights Of Children During COVID-19 Is Important For India, Experts Speak

It is my pleasure to witness the signing of this MoU which I believe will go a long way to eradicate malnutrition in the country. The WCD ministry has been working hard to ensure the good health of lactating mothers and the Ministry of AYUSH also has been working to promote healthy well being, especially amid the COVID-19 pandemic. Both ministries are now coming together to ensure proper nutrition and growth to every child in the country, Mr Naik said during the virtual meeting.

He stressed that ayurvedic medicinal plants have been very commonly used in Indian households in the past and the active involvement in the initiative will greatly improve the health status of children.

Many ayurvedic medicinal plants have been very commonly used in Indian households in the past. This initiative will first be integrated into areas where it is required the most, then will spread to the other parts of the country. I am confident that active involvement will greatly improve the health status of children.

Meanwhile, Union Minister for WCD Smriti Irani described the MoU between the two Ministries as a milestone in the efforts to eradicate malnutrition and said,

Scientific research will be carried out alongside the use of ayurvedic herbs and medicines so that no one can say that we do not have any scientific basis for the prescribed medicines. Each Aanganwadi will have a nutri-garden and a medicinal garden where ayurvedic herbs will be grown.

The MoU was signed in the presence Irani, Naik, and Principal Scientific Advisor to the government of India, Prof K VijayRaghavan, among many others.

Speaking at the signing of the MoU with the Ministry of Ayurveda, Yoga and Naturopathy, Unani, Siddha, and Homoeopathy (AYUSH), Ms Irani said that women and children would get the benefit of yoga classes in Anganwadi centres (AWCs) across the country.

The MoU between the two Ministries is a milestone in the efforts to eradicate malnutrition. Along with the target of having a Nutrigarden in each Anganwadi, medicinal gardens will also be developed in identified Anganwadi centres. Women and children will get the benefit of Yoga classes in AWCs. I am optimistic that together, science and Ayurveda will help in achieving optimum nutritional standards among the target groups, the statement quoted Ms Irani.

As part of #POSHANMaah2020, Nutrition Gardens are being set up across all Anganwadis; now we aim to establish Medicinal Garden as well with the help of @moayush under #Ayush4Anganwadi initiative.

It also quoted the Union Minister of State of AYUSH, Mr Naik saying, AYUSH practices are deep-rooted in Indian tradition.

The Ministry of Women & Child Development and the Ministry of AYUSH has come together with the common objective to eliminate malnutrition and improve the health of people, especially women and children, Mr Naik, who joined the signing ceremony through videoconferencing, said.

Convergence between the MWCD and the Ministry of AYUSH will help address malnutrition through the principles and practices of Ayurveda, Yoga, and other AYUSH systems and provide context-specific solutions for holistic well being of Women and Children, the statement added.

While AYUSH would provide technical guidance and support for the implementation of various interventions for addressing malnutrition, including developing nutritious recipes based on regional and climatic preferences, principles, and practices under AYUSH systems, the Ministry of WCD will enable outreach of AYUSH systems through Anganwadi Centres. Initially, a pilot will be conducted in 1000 Anganwadi Centres each in a few States, which can be upscaled later in a phased manner.

The collaborative efforts will also include setting up of Herbal Gardens with live demonstrations to beneficiaries how to use them through various home-based preparations. Also, Yoga sessions in the Anganwadi Centres would be conducted, the statement said.