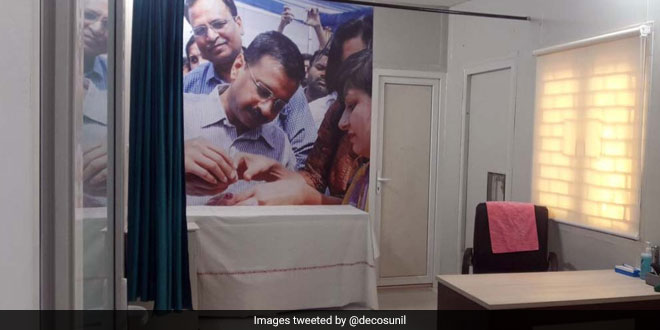 New Delhi: “Healthcare is a right and not a privilege,” these are the words of former US Senator Late Edward Kennedy which were quoted by the Delhi Chief Minister Arvind Kejriwal while announcing the scheme for Mohalla Clinic back in 2014. He further said that healthcare is an integral part of Article 21 – Right to Life and that Delhi will see 1000 Mohalla Clinics in his tenure. The main aim of the clinics is to make public healthcare more affordable and accessible and they do so by providing free health check-ups, consultations and medicines. Today, Delhi boasts about 450 Mohalla clinics, a lot of which were constructed right before the 2020 elections.

According to Health Minister Satyendar Jain, they were unable to achieve their goal because the project got delayed as the AAP government and the Delhi Lt. Governor’s office were at loggerheads over the clearance of the Mohalla Clinics, among various other flagship projects of the party.

It was only in September 2017 that the Lt. Governor gave his nod to the project. However, even after the Lt. Governor’s approval, the project could not fully take off due to non-availability of land, with various landowning agencies, including the Delhi Development Association, not willing to provide land for the clinics.

Mr. Jain has also claimed that due to the heavy footfall at Mohalla clinics, at least 30 clinics in the national capital are working double shifts to ensure healthcare to all.

While the clinic’s usual timing is 8 am to 2 pm, those with double shifts operate 7 am to 1 pm and then 1 pm to 7 pm with different sets of staff, including doctors, a health department official told NDTV.

The community clinics are functional on all days except Sunday, and can help provide basic medical care for common illnesses like fever, diarrhoea, skin problems, respiratory problems, first aid for injuries and burns, dressing and management of minor wounds, among referral services.

Mohalla Cinics also provides 212 types of diagnostic tests by the empanelled laboratories and provides 109 types of medicine and check-ups free.

32-year-old Smita works as a cleaner in a fine-dining restaurant in Greater Kailash, part 2 and is a mother to two children aged 10 and 6 years. She told NDTV about how she earns a little money which would mostly be spent on healthcare facilities for her little ones. She said,

I have young kids, both of them go to school and at their age, they keep falling sick due to some infection or the other, due to their contact with so many children in school. From doctor consultation to diagnostic tests and medicines, most of my salary earlier would be spent in keeping my kids healthy. It was a big burden on me that I feel has been lifted thanks to mohalla clinics, where all these services are provided to me free of cost.

72-year-old retired police official, who was waiting at the community clinic in CR Park to get a blood test done, told NDTV that it is a matter of convenience for him and making use of the good facilities provided by the government. He said,

It definitely benefits a certain group of people immensely, but it also benefits people like me. I can afford to go and pay for my blood test in a lab but why should I? Government has opened a clinic that provides the same service free of cost in my neighbourhood. So why should I go to the hospital and pay money when it is taken care of for me. Even the standard of service is quite impressive.

Mohalla clinics serves both sections of society, one that is looking for convenience and others who are looking for affordable health services. A member of Indian Medical Association lauded the initiative of providing access to free healthcare to NDTV,

Mohalla Clinics have made primary care accessible, equitable, and affordable for women, elderly, and children in the underserved areas. The idea is to have at least one MC within the radius of 1.5 km of such localities. This is an extremely important initiative considering the enormous population of our country that works day and night to be able to afford three meals in a day. This has really lightened the burden on them and surely is a positive move towards a Swasth India.

Dr. Pavitra Mohan from the Basic Healthcare Services told NDTV about what can be done to the concept moving ahead. He said,

Mohalla clinics have revolutionized the delivery of healthcare in Delhi by bringing free healthcare to the doorsteps. More people are able to seek healthcare early in the course of illness, without incurring any costs. Moving ahead, they need to include public health functions such as immunization, prevention and management of epidemics etc. Many states such as Telangana and Rajasthan have adopted the model of Mohalla clinics.

The Mohalla Clinic project has been praised by Former United Nations Secretary-General Kofi Annan and former Director-General of World Health Organisation Gro Harlem Brundtland, with various world leaders seeing it as a move towards achieving better health coverage. Mr. Brundtland also visited one of the clinics Along with another former United Nations Secretary-General Ban Ki-Moon, in 2019 and both were “deeply impressed.”

Also Read: Health Budget Too Meagre To Have Any Impact: Indian Medical Association

To Fight Coronavirus International Organisations Come Together To Fund Research

National Deworming Day 2020: A Manual On Intestinal Worms And Their Prevention