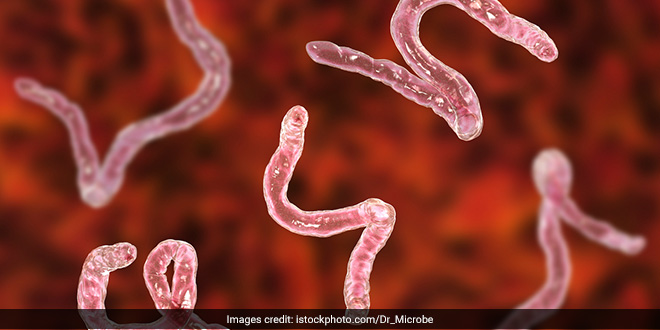 New Delhi: Every year February 10 and August 10 is observed as the National Deworming Day (NDD). The day aims at eradicating intestinal worms also known as Soil-Transmitted Helminths (STH), among children in the age group of 1-19 years. According to the World Health Organisation, about 241 million children in India in the ages of 1-14 years are at a risk of parasitic intestinal worms or STH. This means, India accounts for approximately 28 per cent of the total number of children globally estimated to be at-risk of STH infections.

Here is everything you need to know about deworming and intestinal worms or Soil-Transmitted Helminths (STH):

What Are Intestinal Worms?

Intestinal worms are parasites that live in the human intestines and consume nutrients and vitamins that a child consumes. There are three main types of STH that infect people, roundworm (Ascaris lumbricoides), whipworm (Trichuris trichiura) and hookworms (Necator americanus and Ancylostoma duodenale). These worms depend on the human body for their food and survival and while being there, they lay thousands of eggs each day.

STHs including hookworm, roundworm, and whipworm are transmitted via eggs in faeces deposited in the local environment, typically through open defecation or lack of proper hygiene after defecating, says Dr Antaryami Dash, Head of Nutrition at Save The Children.

Infected people who defecate in the open spread worm eggs in their faeces. Subsequently, the eggs contaminate the soil which further contaminates food and water, spreading the infection.

Intestinal worm infection often makes its way through vegetables which are not properly washed, peeled and cooked; contaminated water; and outdoor activities – children who play in soil and then put their hands in their mouths without washing them.

Children are particularly vulnerable to such infections and prone to transmitting infection, adds Dr Antaryami.

Dangers And Impact Of Intestinal Worms

There is a long list of the negative effects and dangers of the worm infection. Since worms feed on host (human body) tissues, including blood, it leads to loss of iron, and protein, resulting in anaemia – reduced oxygen carrying capacity due to less Haemoglobin (Hb) available in the body.

Worm infection can also lead to diarrhoea; dysentery; loss of appetite; reduced nutritional intake and physical fitness; increased malabsorption – a condition that prevents absorption of nutrients through the small intestine.

Often children consume enough calories but they still suffer from undernutrition largely because their diets are deficient in the essential vitamins and minerals necessary for proper physical and mental development. In addition to this, suffering from intestinal worms’ infection also referred to as soil transmitted helminths (STH) cause, aggravate and intensify the loss of nutrients, especially vitamin A and Iron. This co-existence of micronutrient deficiencies and worm infestation result in impaired growth and development of our young ones, says Dr Shweta Khandelwal, Head of Nutrition Research and Additional Professor at Public Health Foundation of India. 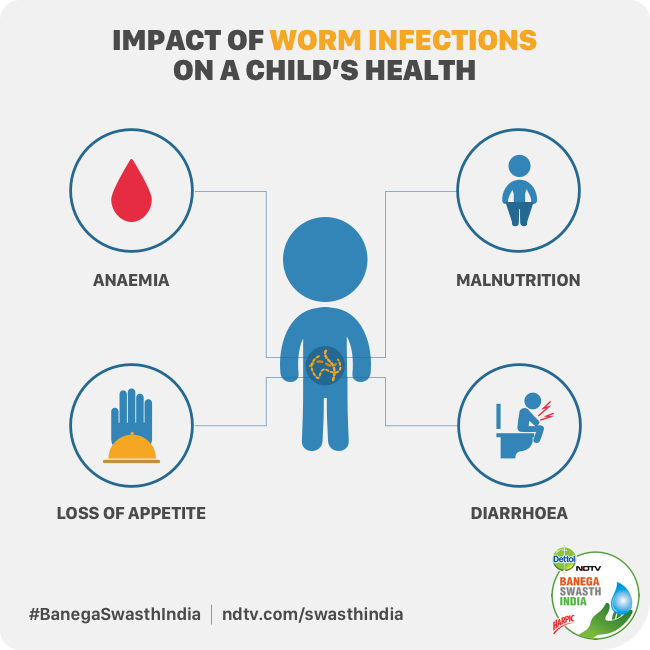 Both children and adults can have worms inside their body and not know about it for a long time. But some of the common and visible signs of intestinal worm infection include unexplained weight loss, fatigue, abdominal pain, diarrhoea, and dysentery. Also, heavy infections often make children too sick or too tired to concentrate at or even attend school. If untreated or undiagnosed, worms can have a long term effect on a child’s health and development.

Albendazole tablet is the suggested deworming drug and its dosage depends on how young a child is. According to experts, Albendazole is an effective drug and doesn’t have any significant adverse effects.

The government of India is targeting around 25 crore children and adolescents to be treated through de-worming tablets on a “fixed day-fixed site” approach followed by a mop-up day (a day to deworm children who missed the dose on the NDD) to cover the remaining, says Dr Antaryami.

How To Prevent Worm Infestation

The foremost step is to improve hygiene which includes washing hands particularly before eating and after using toilet; using sanitary latrines; wearing slippers/shoes; keeping the surroundings clean; ensuring nails are short and clean.

Adding to this, Dr Shweta says,

Two main areas for prevention of worm infestation include ensuring improved access to clean water, sanitation, and hygiene and overall clean surroundings to children so that chances of any infection are minimised; improving the quality of food consumed (by optimal processing and cooking techniques like washing raw fruits and vegetables with clean water). The latter will also help to improve the nutritional status of children so that they have better immunity.

In February 2015, the Ministry of Health and Family Welfare constituted NDD in 277 districts of 11 States and Union Territories (UTs) including Assam, Bihar, Chhattisgarh, Dadra and Nagar Haveli, Haryana, Karnataka, Maharashtra, Madhya Pradesh, Rajasthan, Tamil Nadu, and Tripura. In 2016, the NDD, a day and programme dedicated to deworm children, was scaled up to cover all the districts across the country. Since then it is observed twice a year on February 10 and August 10, across the nation.

The objective of the National Deworming Day is to deworm all preschool and school-age children (enrolled and non-enrolled) between the ages of 1-19 years through the platform of schools and anganwadi centers in order to improve their overall health, nutritional status, access to education and quality of life, reads the operational guidelines issued for NDD by the Ministry of Health and Family Welfare.

Also Read: 5 Signs And Symptoms To Look Out For Iron Deficiency

The deworming activity is carried out in all government and government aided schools and anganwadi centers. On this day, Albendazole tablet (deworming drug) is administered to children. The day is followed by a Mop-Up Day (MUD) with the intent of deworming children who missed the dose on the NDD.

According to the government data, in the first round of deworming, 8.9 crore children (1-19 years) were covered. With each round, the coverage of NDD has increased and in February 2019, the programme reached out to 22.12 crore children.

There are two ways, first, promote the integration of deworming activities within existing public health programs and inter-sectoral platforms in order to optimise coverage; plan optimal delivery strategies for deworming activities that are responsive to local conditions.

Disclaimer: This content including advice provides generic information only. It is in no way a substitute for a qualified medical opinion. Always consult a specialist or your own doctor for more information. NDTV does not claim responsibility for this information.