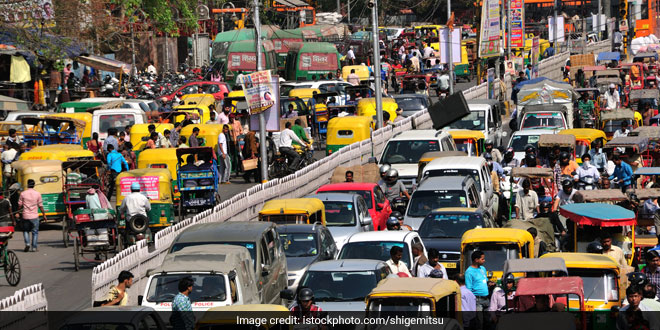 New Delhi: Noting the adverse impact of vehicular emissions on the air quality, the National Green Tribunal (NGT) has directed the transport ministry to conduct a study on the number of vehicles which can be permitted in the national capital in proportion to the capacity of the roads. A bench headed by NGT Chairperson Justice Adarsh Kumar Goel said the menace of illegal parking and encroachments is a serious issue not only in Delhi but in all major cities. “The question of a number of vehicles to be permitted proportionate to the capacity of the roads in a city is a vital issue of planning on which a policy is required to be explored in larger interest of environment especially for cities or areas where air quality is not consistent with the norms,” the bench said.

This needs to be explored by the Ministry of Transport, Government of India in consultation with the concerned States. It may be advisable to have a Committee of experts on the subject which to examine the issue in time bound manner, the bench added.

The tribunal said vehicular emissions add to air pollution which impacts public health. The direction came while disposing of a plea filed by bus operator Metro Transit Private Limited seeking direction to remove hawkers, construction material lying on the roads and stop unauthorised parking for smooth flow of traffic so that the business of the applicant transport company is not obstructed, and environment protected. According to the applicant, it was difficult to conduct operations as substantial parts of roads are occupied either by hawkers or by illegally parked vehicles. The plea said that a large number of idle vehicles parked illegally lead to congestion, adding to air pollution.

Taking note of the plea, the NGT said, “Accordingly, we dispose of this application by directing the Ministry of Transport, Government of India to take an initiative in the matter forthwith and examine the matter in the light to available expert opinions, any fresh expert opinion, experiments elsewhere and all relevant factors. This exercise may be completed as far as possible within three months.” It directed the ministry to submit an action taken report by e-mail on or before March 31, 2019 which may be put for consideration on April 29 next year.

Biomass Burning, One Of The Major Sources Of Air Pollution May Spike 45% By 2050: Study