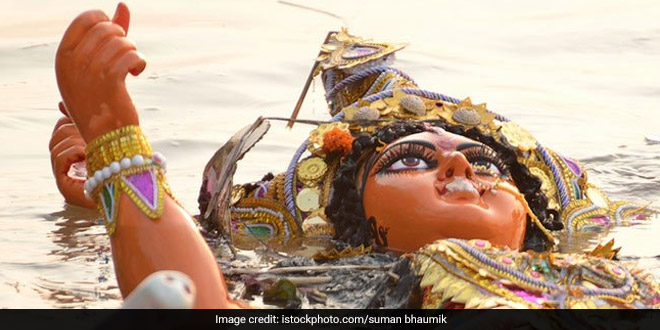 New Delhi: The National Green Tribunal (NGT)- appointed Yamuna Monitoring Committee has asked the governments of Uttar Pradesh (UP) and Haryana to direct their officials to coordinate with the Delhi administration on the issue of idol immersion in the national capital. Since 2015, the NGT has issued several instructions and for the first time, efforts are being made to use pits for immersion of idols in Delhi as has been done successfully in Surat.

Also Read: Researchers Sail In Yamuna To Get Data On Pollution To Help Government Plan Cleanup Strategies For The River

The pollution level in the Yamuna river increases manifold after immersions, rendering it unfit even for bathing. In a bid to reduce pollution in the river, the Delhi Pollution Control Committee (DPCC) has also come out with a list of 151 spots across the city for immersion of idols in the festive season.

In a letter to the chief secretaries of Haryana and Uttar Pradesh, the committee said that immersion of idols made of plaster of paris (PoP) and containing heavy metals into the Yamuna is banned by the Central Pollution Control Board (CPCB). The letter reads,

Idol immersion in the Yamuna is a big religious tradition. Over 30,000 idols are immersed during Ganesh Puja and another 10,000 during Durga Puja. Whereas Durga Puja idols are perhaps made in eastern India and are brought to Delhi in an unfinished form, Ganesh idols are, according to the information given to us, fabricated in the neighbouring districts in Uttar Pradesh and Haryana.

The committee asked the states to issue instructions to district magistrates of the regions bordering Delhi to establish “effective coordination between them and Divisional Commissioner, Delhi, Rajeev Verma, who is in-charge of coordination of all activities relating to idol immersion” in the national capital.

The divisional commissioner will hold a meeting with the district magistrates concerned from the two states to see that unfinished idols are not sent to Delhi, unless they conform to the guidelines of CPCB and the statutory instructions of the Delhi Pollution Control Committee (DPCC), the letter said.

The meeting will prevent altercation with transporters and others at the border. It would be better if the process of sensitisation of the sculptors starts immediately after the meeting, it said.

Transition To Electric Vehicles May Take Longer Than 2030: The Energy And Resources Institute