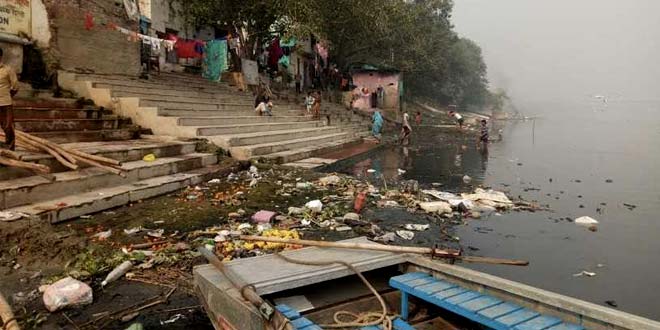 New Delhi: While the government has been spending crores on cleaning the Yamuna river since past three decades under programmes like Yamuna Action Plan and Sewerage Master Plan 2031, water quality in the river, however, is still on the deteriorating path. The poor water quality of the Yamuna, which is a major tributary of the Ganga, is not only harming the aquatic ecosystem of the river but is also posing serious threats to about five crore people residing near the river, as per World Water Database. This prompted a team of researchers from the University of Chicago to initiate a project about a year and a half ago to study Yamuna river with an aim to identify the major polluting sources and measure in pollution in the river in real-time. Thus creating a real-time database for the policymakers, experts and implementing agencies like water Boards and pollution control boards to plan specific strategies to revive the almost dying river.

The ongoing project called ‘Water-to-Cloud’ was developed by Professor Supratik Guha of Institute for Molecular Engineering at the University of Chicago along with researchers at Tata Centre for Development (TCD) at UChicago, and International Innovation Corps which uses real-time and geo-tagged data (digital data with geographical location) data to study the health of major water bodies across India and find pollution hotspots using sensors that provide real-time data.

While talking to NDTV about the project, lead researchers Priyank Hirani and Himank Sharma, explained that currently, they are studying the stretch of the Yamuna between the Wazirabad barrage and Okhla barrage in Delhi. As per Central Pollution Control Board (CPCB) Yamuna water in this stretch is most polluted. Mr. Hirani said,

Pollutants are entering the Yamuna river due to the sewage dumping, industrial, agricultural and other human activities. We are trying to study the effects of each of these factors and for this, it is essential to have data from continuous measurements or the real-time. The problem with the sample collected and then tested in a laboratory is that apart from being a time-intensive process, it can also give erratic measurements because of the sample being stored for a long time. Along with this, the lab analyses may not always give a holistic picture of the health of rivers as they are dynamic ecosystems and require continuous monitoring.

What Comprises The Project?

Mr. Hirani said that the project aims to develop water quality monitoring systems that would act as an early warning system and be in real-time. This means that experiments under the project include sailing down the river on a boat equipped with sensors to map points with maximum pollution instead of laboratory testing of the water sample. The data thus collected is uploaded on a dedicated website of the University of Chicago for open access to the people and the government agencies to take clues for building Yamuna cleanup programmes.

We have conducted 34 boat sailing experiments in the river Yamuna and have collected 60,078 data points between Wazirabad barrage and Okhla barrage. The project will help the concerned authorities since the exact pollution hotspots can be identified. For example, during one of the experiments under the ongoing project, we found exact locations at Nigambodh Ghat where effluents entered the Yamuna and collected data which indicated the level of effluents that make the river water polluted and unfit for the people and aquatic life.

One of the major findings of the ongoing project is that the level of oxygen dissolved in water, that is required for aquatic life to sustain and keep the river clean, in the Wazirabad-Okhla stretch is alarmingly low. The scientists found that oxygen in this stretch has decreased, because of the excessive algae growth caused by the effluents from urban areas.

While the current project is still undergoing, the team has already started working on another project along with students from Ambedkar University, Delhi to find out the impact of the pollution in the Yamuna water in Wazirabad-Okhla stretch on people who live around this stretch.

The scientists have received appreciation and support from the government agencies who have expressed their willingness to use the data collected under this project so that a robust cleaning and rejuvenation of the river can be planned and better monitoring of water in the Yamuna can be done. Mr. Sharma said,

We are currently in discussions with some governemnt agencies and policy makers to use the findings of this project in building clean programmes and rejuvenating schemes for the river.

As per the lead researchers, the team would continue to study the river Yamuna and provide the findings to the government authorities, pollution control boards, health experts, and other decision-makers to help them make choices for water usage based on real-time data and ensure regulatory compliance and plan actions for rejuvenation and cleaning of the river. Apart from studying the water of the river Yamuna in the Wazirabad-Okhla stretch, the team has started similar experiments in various stretches of the rivers Ganga and Godavari.

How Polluted Is River Yamuna?

The Yamuna, which is the life-source for about five crore people, is one of the most polluted rivers in the world. Because of the rising levels of effluents in the river due to domestic activities, industrial units and erratic agricultural practices along the banks of the river, experts have given it the status of an almost dying water body. According to CPCB, about 6018 MLD (million litres per day) of wastewater is generated in the cities near the Yamuna out of which 4198 MLD is contributed by Delhi alone. However, only 70 per cent of this waste is being treated currently by the Sewage Treatment Plants (STPs) operating in the cities along the river. As per CPCB, the most polluted stretches of Yamuna are: Wazirabad to Asgarpur in Delhi, Panipat to Sonepat in Haryana, and Shahpur to Allahabad (Prayagraj) in Uttar Pradesh.

Air Pollution: Driven By Concerns Related To Environment, This Automobile Giant Is Phasing Out Diesel Vehicles