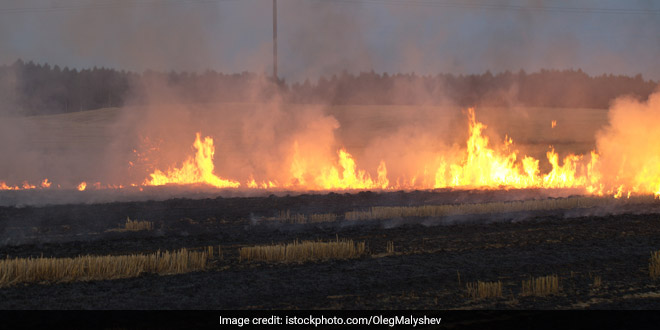 New Delhi: The National Green Tribunal (NGT) on Friday (May 31) expressed surprise over stubble burning at a government institute in Jaipur despite its order prohibiting such activities and issued notice to the Centre and Rajasthan government as to why action should not be taken against them over the incident. Observing that stubble burning has become a menace; a bench headed by Justice Raghuvendra S Rathore also issued notices to Bikaner Agriculture University, Director Agricultural Research Institute, Rajasthan State Pollution Control Board (RSCB) and Central Pollution Control Board (CPCB).

Also Read: Jaipur Will Be The First Rajasthan City To Get Electric Buses As The State Plans To Electrify Public Transport

The tribunal passed the order after taking note of a news report about stubble burning after harvesting of crops at Agricultural Research Institute in Jaipur.

The report mentioned that despite a stay order by the NGT, prohibiting burning of stubble in the states, the Agricultural Research Institute has in its campus burned down the agricultural residue after harvesting the crop.

Here is a case where not our farmers but government and its instrumentalities are themselves taking the steps which had been of serious concern for the public at large and the State is duty bound to prevent/prohibit such practices. Moreover, several orders have been passed by the Tribunal in the past with the directions to the States for taking appropriate steps.

Therefore, we deem it proper to take suo-moto cognisance. The office is directed to register the same as an original application. Issue notice to all the concerned people as to why action, in accordance with law, may not be taken against them, including the principle of ‘polluters pays’.