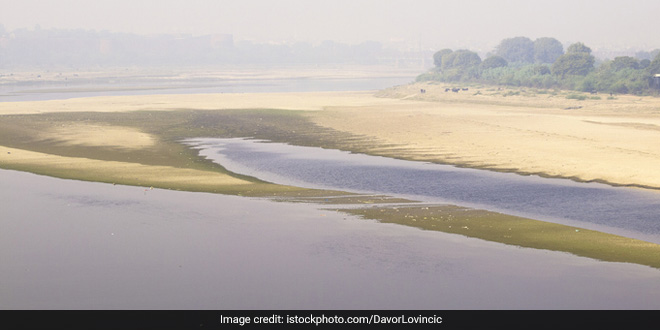 Agra: Environmental activists here held a symbolic ‘sand bath’ to draw attention to the plight of the polluted and drying Yamuna river. The activists on Sunday (June 2) evening joined a mass community event to draw the government’s attention to the sewage canal that the river has been reduced to without water. The activists ‘pretended’ to swim and jump on heaps of sand collected from the dry riverbed. They said if there was no water in the river, they would naturally have to bathe in the dry sand.

The event drew large crowds on the riverbank at the Etmaddaula View Point Park.

The dry Yamuna is not just a threat to the ecological balance in the city but a danger to the historical monuments along the banks, including the Taj Mahal, said river activist Shravan Kumar Singh.

Union Minister Nitin Gadkiri has promised steamers that would bring tourists from Delhi to Agra on the river, but so far no work has been done.

“Without water in the river how can steamers move,” asked Goswami Nandan Shrotriya, chief organiser of the sand bath programme.

What actually flows in the form of liquid in the river right now is not water but sewage, slush, and effluents from upstream industrial towns. The toxic substances are seeping into the foundations of the monuments, which one fears, could crumble or just cave in, said river activist Jyoti Vishal Jha.

The activists said “this is the only way we can draw the attention of the Uttar Pradesh government in Lucknow and the Central government in New Delhi, both having promised to rejuvenate the river, but hardly anything had been done so far in this direction,” said activists Padmini and Nidhi Pathak.

All the water is held up at Okhla and Hathini Kund, what flows down is sewer waste and industrial effluents.

Related Topics:
Agra Yamuna
Up Next