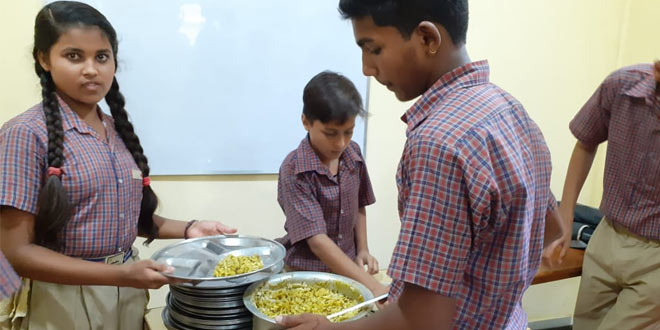 New Delhi: Mid-day meal programme was started by the Government of India back in 1995 with an aim to tackle malnutrition by providing lunch to the children belonging to disadvantaged sections and to help them attend the school more regularly, as per the National Health Portal. The scheme was later universalised in all public schools in the country in 2001. The scheme has been able to achieve positive results for enrolment and retention in schools at various places and was serving about 9.12 crore students across 11.35 lakh schools in 2018-19, according to the Ministry of Human Resource Development (HRD). However, there have been many instances where children have been served substandard meals impacting the health of the kids. Recently, in Uttar Pradesh, a report revealed a school that was serving ‘roti and salt’ to students. Similarly, in August 2018, in Jharkhand, an upper primary student had died and more than 60 were hospitalized allegedly after having the contaminated school meal. Amidst such controversies surrounding the mid-day meal scheme, a ten-year-old non-governmental, non-profit school in Gurgaon (Gurugram) in the National Capital Region, ‘Diksha School’, shows that mid-day meal can be easily made safe, wholesome and delicious for the children and aid in their overall development.

The school was co-founded in 2008 by Captain Rajesh Sharan, a former Air Force pilot, and Shanta Sharan when they saw that some children from the disadvantaged section in their neighbourhood were not able to get school education and spent most of the day just loitering on streets. Co-founder of the school, Shanta Sharan said,

We picked up 13 children who were roaming around on the road and started this school. We observed that the children were very weak. Quite often we saw that the children used to come to school without having proper breakfast. This is because their parents were daily wage earners and migrant workers like construction workers, rickshaw pullers, and domestic helps, who were required to leave for work early in the morning and come back only in the evening. The children used to fall sick very often. We soon realised that besides education we need to provide them with nutrition as well. So we started the mid-day meal routine in our school.

Since 2008, Diksha school has been enrolling children from economically disadvantaged sections of the society. The mid-day meal programme was started in the first year of establishing the school. While talking to NDTV about the school’s mid-day meal initiative, the Principal, Vandana Aneja said,

Mid-day meals, in Diksha School, are served to all classes starting from Nursery upto Class XII. We provide snacks to the children in the morning around 10-10:30 which includes bananas and biscuits. Lunch (sambhar, a cooked vegetable, and rice) is served around 1 pm. The effort is to give them a wholesome meal. Lunch is a very important meal of the day.

Today the total strength of the school is 410 students and with the help of volunteers and teachers, the mid-day meal has become stronger and is the highlight of the day for students. As per Principal Aneja most of the students are children of migrant workers from neighbouring states and in most cases, both parents are working. Thus it becomes difficult for these children to get timely and nutritious meals at home. She said,

Few parents told me that when the kids get ill and the parents ask them to stay at home, they would still urge to come to school to have the meals especially on the days when the menu has something of their liking.

The Effort Is To Provide A Wholesome Meal

The food is cooked in the school campus by two cooks and is tasted by a designated team of volunteers every day before serving it to the students to ensure the taste and quality. The menu is designed considering the nutritional needs of the children. Ms. Aneja asserted,

In most of the families, both parents are required to leave the house early morning for making a living and return late in evening. We make sure that the kids have a good meal during the day at school. The lunch usually includes legumes, sambhar, rice, khichdi, and vegetables. We try to make the food wholesome. We don’t have the capacity to give them chapatis because cooking chapatis for 410 children and provide them on time is not possible at the moment. We try to put in variety like dal-palak, idli, soya chunks.

According to her, about 16 kg of rice, 14 kg of lentils and 6-8 kg of vegetables are cooked each day to serve the 410 students. The cost of serving the meal to the students is Rs. 3,500 per day for which the school gathers financial support from volunteers, neighbours and corporates during the fundraising campaigns. 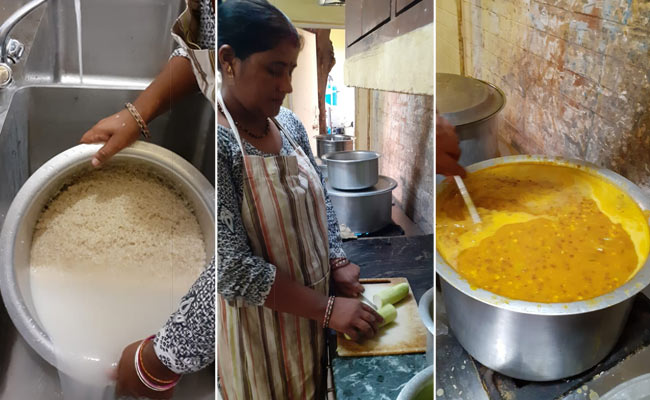 According to Principal Vandana Aneja, about 16 kg of rice, 14 kg of lentils and 6-8 kg of vegetables are cooked each day to serve the 410 students

For Ajay Yadav, a 32-year-old parent of 7-year-old Anmol who is in Class 1 and 4-year-old Anurag who is in Nursery, Diksha is not only feeding his children but also helping them become better human beings. To him, the best thing about the school’s mid-day meal programme is that the children are allowed to eat as much as they want. He said,

I am a simple pantry boy with Spice Jet and my wife works as domestic help in the neighbourhood. A lot of times we face situations where we need to decide between filling our stomachs and meeting the nutrition needs of our children and ourselves due to financial crunch. Most of the time we end up buying food items just enough to eat to fill our stomachs. Diksha has given us some hopes. At least our children get wholesome meal once a day, every day.

Rajni, 29-year-old mother of 8-year-old Neha shared that being a migrant worker, earning a daily wage is an everyday struggle and nutrition is never on the mind. She added,

While we earn mainly for food and shelter, we hardly think about nutrition. We eat whatever is most affordable. I have a family of seven people and each one needs to be fed. Usually, girls and women in our community eat after the males have eaten. Sometimes we get stomach full food, sometimes we don’t. Neha is at least getting a one-time meal properly at her school. I am very happy with this. 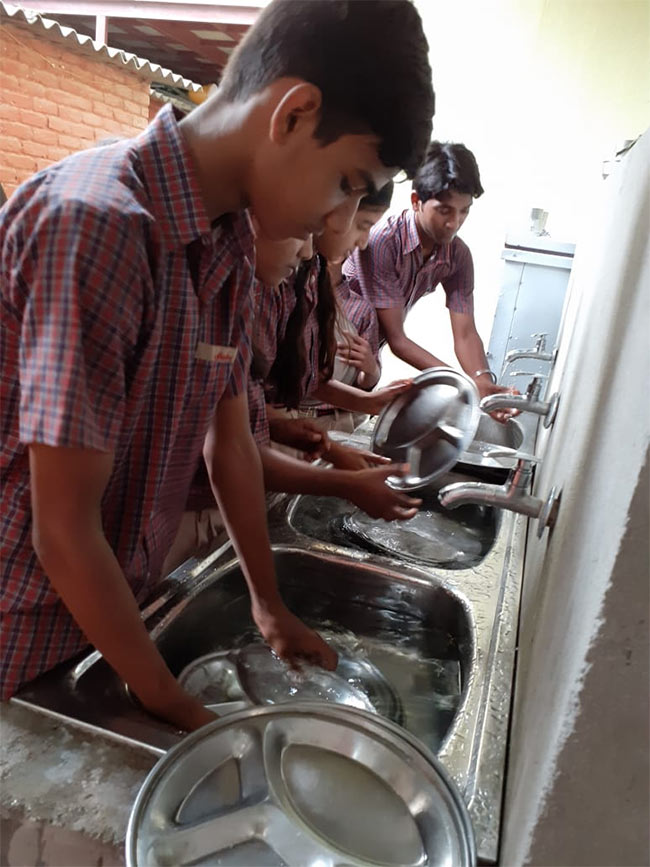 Other Efforts Of Diksha School To Keep The Children Healthy

“We consider the wellbeing of our students as our responsibility and not an act of charity. Along with food, we put emphasis on exercises as well. We encourage them to make the habit of being physically active. We have one yoga class, one games period and one physical training (PT) period every week,” said Principal Aneja.

During medical examinations, we find that the old students have a better state of health than the new ones as the older students have spent more time in the school. Every year, when we take new admissions, we see that deficiencies are evidently visible on them for example, they are underweight, and the hair and skin are dry. As they start getting healthy meals regularly, their health becomes better.

To make them aware about the importance of wholesome food and to educate them about the nutritional values of certain meals, the school also conducts workshops for parents. Aastha Gulati, media coordinator of the school shared that alcohol and substance abuse is becoming a major problem among the teenagers in the neighbouring areas of the school. Thus the school is trying to fight this through workshops and interventions.

Regular Parent-Teacher meetings are organised to keep the parents aware about their kids’ academic performance and progress.

As per Ms. Aneja, in its journey of 10 years, Diksha School has seen enrolments increasing every year. The enrolment system is designed to identify the most-needy students. The process includes putting out a register in January which allows the aspiring parents to register for admission of their children, the school committee then evaluates the profile of the parents and call the most-needy families for entrance test and admission in March. She said,

Enrolments are increasing every year but since we have only 35 seat in each class, we have to limit admission. There is a positive trend in retention too. Earlier, children used to go back to villages and never return, as most them belong to the family of migrant workers but now they go just during the vacation and for some days if needed, by submitting an application before leaving.

She further informed that the school is working on increasing the number of classrooms as some people have sponsored portable cabins for the school.

As the school enters the 11th year of its existence, Ms. Aneja hopes that the support received by the school grows so that it can serve more students and aid their development. Talking about the challenges faced by the teachers and school administration, she said that some students are very distracted and they are working on such students with the help of their parents to bring their attention to studies.

She highlighted that some of the current students are extraordinary performers and are very dedicated even with minimal resources. The school also helps meritorious students get sponsorships to pursue higher studies.

Till now one batch of four students passed Class 12, in 2018-19. As per the principal, each student scored first division. She further said that out of these four students, one girl is perusing Bachelor of Arts from PG College Lukhnow, one boy is doing Bachelor of Computer Application at St. Andrew College, Gurgaon, one boy is a correspondence student of Data entry from SGT (Shree Guru Gobind Singh Tricentenary) College, Gurgaon while one girl had to take a year’s drop since her mother has been diagnosed with cancer. Ms. Aneja signs off saying,

A very long time has passed since the mid-day meal scheme was launched in the country. It is time that we widen the scope of this scheme to cover students enrolled in private schools as well. Just as Surva Siksha Abhiyaan provides an opportunity for the underprivileged children to attain education at private school, Mid-Day meal scheme should help these kids to get healthy food.