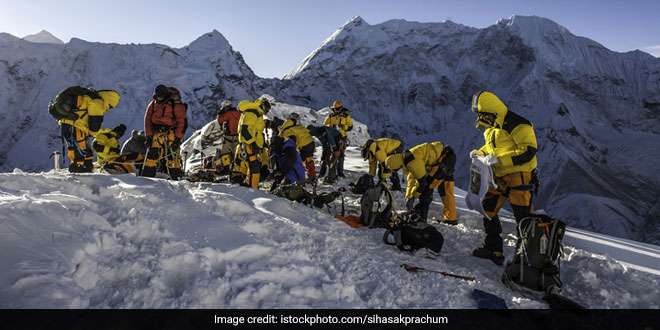 Kathmandu: In a bid to save Mount Everest from trash, Nepal conducted a month-long cleaning campaign by collecting over 10,000 kg of rubbish from the region. The historical mega clean-up campaign coordinated by government and non-government agencies by mobilizing a dedicated Sherpa team from the base camp to four higher camps, not only collected waste but also removed four dead bodies from the roof of the world, Xinhua news agency reported on Sunday. Instead of sending the solid waste to dump in the landfill site near Kathmandu, the items were segregated, processed and recycled as raw materials for various products.

We segregated the collected materials in different categories like plastic, glass, iron, aluminium and textile. Among 10 tonness of waste received, two tonnes have been recycled while the remaining eight were soil mixed with wrappers and semi-burned items, which could not be recycled, Nabin Bikash Maharjan, the head of Blue Waste to Value, told Xinhua.

More than 50 people have been involved in Kathmandu-based Blue Waste to Value since 2017, which is a social enterprise dedicated to creating value from waste.

Besides recycling the waste of the mountain, Mr. Maharjan’s team is also working with municipalities, hospitals, hotels and different offices to maximize value from waste by recycling, reducing the amount of waste sent to landfills and by creating green jobs.

To make the Everest cleanup campaign more effective, the company suggested authorities to set up an initial processing unit in the mountain area itself, so that waste can be segregated immediately and easily managed.

Though the company does not recycle the materials itself, it collaborates with another firm called Moware Designs to create up-cycled glass bottle products and to sell them online.

Ujen Wangmo Lepcha from Moware Designs shared that the unique, colourful and artistic glass products are a trend recently for home, offices, restaurants and hotels. They are used as decorative items as a flower vase, candle cover, plates, travel cups, regular drinking glasses or as an accessory.

Basically these waste products have no value in the market, so we are trying to add value and trying to reduce the waste from landfill. The products are environment-friendly and full of art, Ms. Lepcha told Xinhua.

The young entrepreneur said that these products, which range from 350 Nepalese rupees to 2,000 Nepalese rupees ($3 to $18), are bacteria free as they are sterilized. The same glass items have also been a means of livelihood for many local women who shape the trash into trendy designs.

According to Nepal’s regulation, every foreigner needs to pay $11,000 as royalty while a Nepali climber has to pay $710 to scale the 8,848-meter-tall mountain.

Besides, the government collects garbage deposits from the climbers with a provision of refund after they bring back at least 8 kg of garbage. High altitude guides claimed that piles of trash are still found in the mountain with an adverse impact on health and the environment.

The Nepal Mountaineering Association said the government should come up with a new policy to have a separate fund, which can be used to continue the cleanliness campaign to make the mountaineering industry sustainable.

Related Topics:
Garbage Waste
Up Next

Water Woes: Taps In Government Buildings To Have Flow-Controlling Device To Save Water