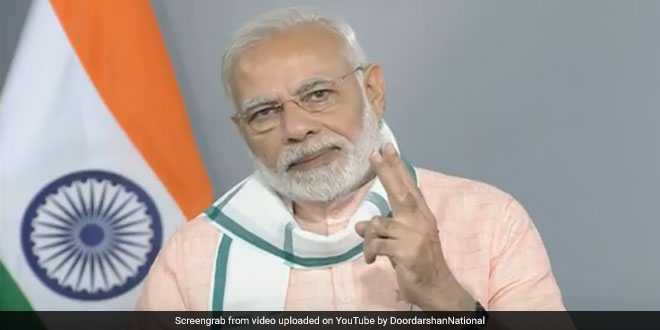 New Delhi: ‘Today, September 15, is a historic day, as from this day we are starting a new resolution to keep our India Clean. We are launching a 15-days cleanliness campaign –  Swachhata Hi Seva,’ says Prime Minister Narendra Modi as he launches the movement across the country ahead of  Mahatma Gandhi’s birth anniversary on October 2. Addressing the nation, PM Modi said,  “All of us together with great pride can say that we are taking the Swachh Bharat Mission forward successfully. In the year 2014, India’s swachh coverage was mere 40 per cent, today, because of the efforts of all the swachhagrahis, we have taken the coverage to 90 per cent. Who would have thought that we can achieve what not have been achieved in the last 60 years.”

Nobody had thought that India can construct 9 crore toilets in 4 years, or can make its 4.5 lakh villages, 450 districts, 20 states and Union Territories open defecation free. This is the result of all the efforts of swachhagrahis.

PM Modi also highlighted the findings of World Health Organisation that has reported that because of successful implementation of Swachh Bharat Mission, in last four years, more than 3 lakh lives have been saved in India and cases of diarrhoea has been reduced by 30 per cent.

Clean India movement is not just about successful toilet construction, we need to learn how to manage our waste effectively, we need to keep our surroundings clean. Swachhta is a habit and should be practised daily, added PM Modi.

Through a video conference PM Modi also interacted with famous personalities such as Actor Amitabh Bachchan, Ratan Naval Tata, the chairman of the Tata Trusts, Chief Minister of UP Yogi Adityanath, Sadhguru Jaggi Vasudev, Indo-Tibetan Border Police jawans and common people from different parts of the country – Assam, Gujarat, Noida, Coimbatore and more, and urged every individual to come forward and do their bit in this mass movement and by October 2, 2019, help fulfill Gandhiji’s dream of a Clean India.

On the other hand, interacting with PM Modi and further strengthening the message of Swachhata Hi Seva movement, Actor Amitabh Bachchan said,

Four years ago, PM Modi introduced the nation to the Swachh Bharat Mission. It is then, I too decided to get involved as a responsible citizen of India. I have been associated with various cleanliness campaigns including the campaign to clean a beach in Mumbai and a television campaign with NDTV-Banega Swachh India where we are organising 12-hours of cleanathon every year with an aim to take the mission forward.  I will continue to work for a Swachh Bharat always.

Also Read: Amitabh Bachchan Blogs, ‘Do Just One Act Of Cleaning Up The Environment’

Ratan Tata added, “Swachh movement should be the dream of every citizen of India. To be a strong India, the foundation has to be strong and that foundation is the health of our people. The health of our people cannot be there without sanitation and cleanliness. We can reduce and eliminate several diseases if we support the Swachh Bharat Movement.”

Sadhguru Jaggi Vasudev asserted that Swachh Bharat is not a movement of any Government or any Prime Minister. It is a nation’s movement.

Announcing that Uttar Pradesh will become free from open defecation on October 2, 2018 under the baseline survey, UP Chief Minister Yogi Adityanath said,

“Earlier for UP, cleanliness was a distant dream. Prime Minister, your emphasis on cleanliness changed it all. After March 2017 the movement towards a Swachh Bharat got a boost in UP. On this October, we will make UP free from open defecation, and by October 2, 2019, we will make sure that no house in UP will be without a toilet.”

The contribution of India’s Nari Shakti in the Swachh Bharat Mission is immense. Youngsters are ambassadors of social change. The way they have furthered the message of cleanliness is commendable. The youth are at the forefront of a positive change in India.

Just One Piece Of Plastic Can Kill A Sea Turtle, Shows A Recent Scientific Study