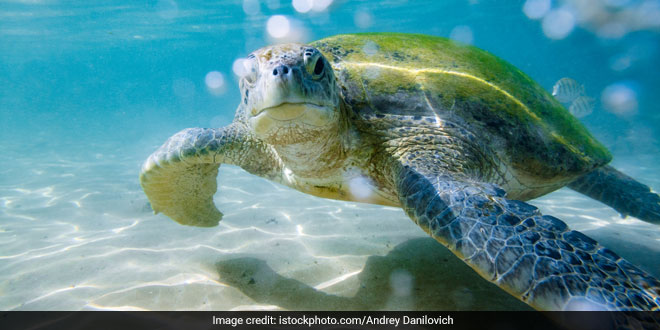 Canberra: A sea turtle has a 22 per cent chance of dying if it eats just one piece of plastic, an Australian scientific institution revealed on Friday (September 14), quantifying for the first time the risk that plastic pollution poses to sea turtle populations. Scientists found that there was a 50 per cent likelihood that a sea turtle would die if it had 14 plastic items in its gut, according to a statement from the Commonwealth Scientific and Industrial Research Organisation (CSIRO).

However, “even a single piece of plastic can kill a turtle”, said Kathy Townsend of the University of the Sunshine Coast, who participated in the analysis of nearly 1,000 turtles found dead and washed up on beaches around Australia, reports Efe news.

Also Read: When A Whale Dies From Eating Plastic Bags

Some of the turtles we studied had eaten only one piece of plastic, which was enough to kill it. In one case, the gut was punctured, and in the other, the soft plastic clogged the gut, Kathy Townsend said.

Prior to this study, it was unclear if the plastics in the oceans killed sea turtles or if they simply ingested them without major harm.

Sea turtles are among the first animals recorded to consume plastic debris, a phenomenon that occurs worldwide in all seven species of marine turtles.

Globally, it is estimated that 52 per cent of sea turtles have eaten plastic.

According to the United Nations, eight million tonnes of plastic waste ended up in the oceans each year.

The UN suggested that if this trend continues, there will likely be more plastics than fish in the oceans by 2050, as seabed pollution is already present in every region worldwide.