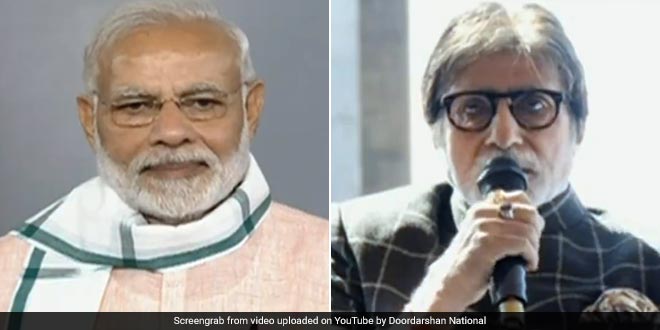 New Delhi: Actor and NDTV-Dettol Banega Swachh India campaign ambassador, Amitabh Bachchan lauded the role of the annual 12-hour Cleanathon held on October 2, as part of the campaign, for its role in spreading awareness about the Swachh India movement. Mr Bachchan was among those who interacted with Prime Minister Narendra Modi via video conferencing during the launch of Swachhata Hi Seva movement.

Prime Minister Narendra Modi launched the 15-day cleanliness drive by interacting with students, celebrities and Swachhagrahis from across India. Actor Amitabh Bachchan who has been an active part of the Swachh Bharat Mission since its launch in 2014 by PM Modi, said that he has been a part of the cleanliness movement as a citizen of India. The actor, who has been a part of multiple promotions on the Swachh Bharat Mission, said that merely promoting the movement is not enough, as individual’s contribution is what mattered more.

Talking about the Versova beach clean-up movement in Mumbai, spearheaded by environmentalist Afroz Shah, Mr Bachchan said that before the launch of the clean-up campaign, the beach was filled with garbage. All that was disposed in the sea was being carried back to the beach. The actor said that he visited Versova beach and took part in the cleaning up activities. He mentioned how the garbage in the beach was buried under sand and volunteers struggled to dig out the garbage barehanded, till he gifted an excavator machine and a tractor to Afroz Shah and his team, to help them in their clean-up efforts.

Mr Bachchan also heaped high praise on NDTV at the launch of PM Modi’s Swachhata Hi Seva movement. Talking about the 12-hour telethon organised by NDTV every year on October 2, Mr Bachchan said that the programme helped in highlighting the cause at a national level, with Chief Ministers of states being a part of the telethon to discuss cleanliness initiatives. The actor mentioned how the launch of the Swachh Express in the first year of the campaign covered 400 villages to spread awareness about the importance of sanitation. This was followed by the introduction of Swachhta ki Pathshala where school students were taught about hygiene. Subsequently, the #Mere10Guz initiative as part of the Cleanathon, which promoted the concept of how if each individual ensured that 10 yards of their surroundings is clean then India could become clean, was also mentioned by Mr Bachchan.

The actor also talked about his interaction with Maharashtra Chief Minister Devendra Fadnavis, and how both participated in a cleanliness drive in a hospital during Maha Cleanathon, and his visit to a co-operative housing society in Mumbai which had taken up composting of waste within their premises.

Thanking the PM Modi during the launch of the Swachhata Hi Seva movement, Amitabh Bachchan said that he hoped to continue work for the Swachh Bharat Mission and contribute towards cleanliness in the country.