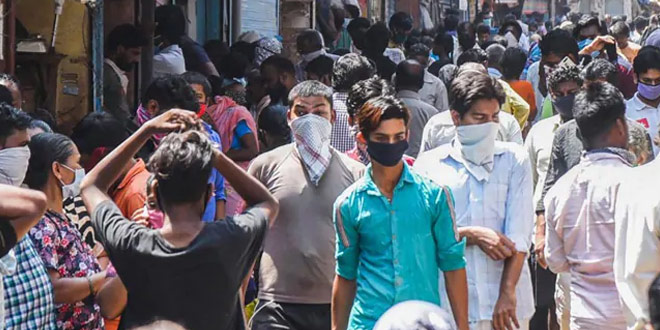 The national capital reported 39 fresh cases of the infection with a positivity rate of 0.07 per cent on December 1

New Delhi: With the number of fresh COVID-19 cases going up by 10 times from what it was at the beginning of the month in Delhi, experts on Monday (December 27) said the number of cases will see an increase in the next couple of months due to the Omicron variant of the coronavirus, with the peak likely to be attained in February. Delhi reported 290 fresh Covid cases on Sunday with a positivity rate of 0.55 per cent, while the number of new cases and the positivity rate rose to 331 and 0.68 per cent respectively on Monday.

The national capital reported 39 fresh cases of the infection with a positivity rate of 0.07 per cent on December 1. The following day, the positivity rate had declined to 0.06 per cent, while the number of fresh cases was 41. Between December 9 and December 15, Delhi logged 48 daily cases on an average, which rose to 95 between December 16 and December 22. According to official data, it was a rise of 49.47 per cent on a weekly basis. Epidemiologist Giridhar R Babu said,

It is very unlikely that the number of cases has risen due to the festive season because in that case, the impact would have been seen 14 days after Diwali in November and the number of cases would have risen by November-end. The number is rising due to the Omicron variant, which is highly transmissible. The cases will see a rapid ascent and a rapid descent and the peak is likely to come between mid-January and mid-February.

Dr Jugal Kishore, the head of the community medicine department at the Safdarjung hospital, said the number of coronavirus cases and the positivity rate are bound to increase, but will not translate into mortality.

What we can say is that 60 per cent to 70 per cent of the present cases could be related to Omicron, while the rest could be due to other variants. The transmission occurs because of proximity. In winter, people are indoors and meeting each other in a close-knit environment, and even the number of influenza cases rises during this period, he said.

The senior doctor also said till the time the panic button is not pressed and the situation is managed well, there will not be any issue.

All kinds of disasters are results of a system failure. The government should formulate guidelines on proper management. Those who are suffering from issues like a severe headache or fever should go to hospitals while the rest should manage at home and should not even go for testing. After testing positive, the person will panic trying to grab hospital beds and medicines, he said.

Dr Babu said those who have not been vaccinated and have not been infected with the virus are more susceptible and it is that population that needs to be looked after. Dr Kishore echoed similar views and said while vaccination does not mean one would not contract the infection, it certainly reduces the severity of the infection.