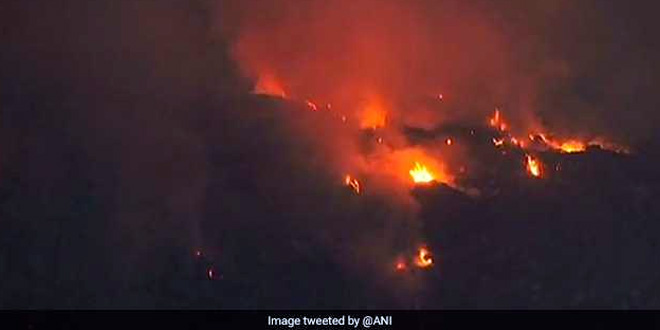 New Delhi: Noting lack of co-ordination between the Delhi government and municipal corporations, the National Green Tribunal has asked them to show cause why punitive action be not initiated against erring officials for not complying with its order on fire incidents at the Ghazipur landfill site.

“Why the tribunal should not take punitive action against all officers of municipal corporations and NCT Delhi for violation and not complying with directions issued by the tribunal from time to time, particularly in relation to the Ghazipur site and in the case of Almitra H Patel ? Why the tribunal should not award compensation in terms of Section 15 and 16 of the National Green Tribunal Act, 2010 to families of persons who died and/or suffered as a result of this unfortunate incident resulting from sheer negligence and irresponsible performance of their duties by local authorities,” the bench said.

The tribunal said there was no coordination among the Delhi government, fire department and the municipal corporations.

“We direct each of these entities to submit to the tribunal as to what is the nature of coordination and cooperation they seek from each other. In fact, we would desire them to resolve this issue among themselves and work in-tandem,” the bench said.

The NGT directed all corporations to file complete and comprehensive action plan within one week to show as to what immediate steps are being taken to restore the site at Ghazipur within the prescribed norms as well as in relation to other sanitary landfill sites in NCT Delhi and also asked them to inform what is the stage of construction of another waste to energy plant that was proposed by the North Delhi Municipal Corporation and when it is possible tocommence this waste to energy plant.

“The National Highways Authority of India shall also show cause as to why they have not started lifting of segregated waste from the site, despite orders of the tribunal from time to time. Issue show cause notice to Delhi Development Authority as to why appropriate sites have not been provided to the respective Municipal Corporations for preparing the same as sanitary landfill sites strictly in accordance with Solid Waste Management Rules, 2016,” the bench said.

The tribunal had earlier rapped the EDMC over its report on a recent fire incident at the Ghazipur landfill site, saying it cannot allow non-compliance of its orders to solve the issue. Advocate Sanjay Upadhyay had earlier told the NGT that after a major fire on September 1 last year, another fire had broken on March 18 at the landfill site and as per the tribunal’s order in case of such incidents, appropriate action be taken against authorities concerned. On September 1 last year, a portion of the 45 metre-high garbage dump in east Delhi’s Ghazipur had collapsed due to heavy rains, killing two people and pushing a car and three two wheelers off the road into a canal. Another blaze had erupted on October 19 and 20, 2017 and was extinguished after hours of fire-fighting operations.

The NGT had earlier directed the Delhi government and civic bodies to submit an action plan for identifying alternative landfill sites and setting up waste-to-energy plants in the city. It had said it was unfortunate that at a time when the national capital was grappling with huge quantum of waste to the tune of 14,000 metric tonnes daily, the authorities were involved in a “blame game” and showing an irresponsible attitude.

Related Topics:
Delhi Landfills
Up Next

Is Plastic Peril Becoming A Slow-Motion Weapon Of Mass Destruction?

Indian Cities Top The List Of Most Polluted Cities In The World, 9 lakh People Die In India Due To Air Pollution: WHO