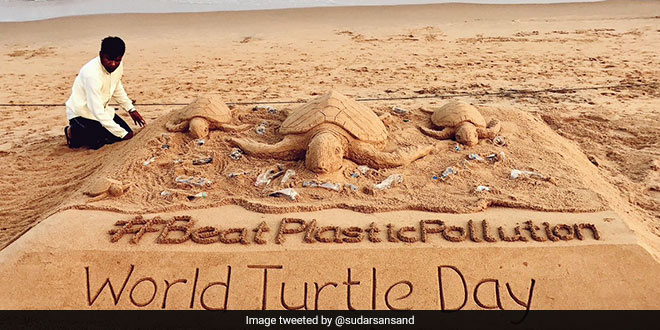 New Delhi: Thousands of turtles are dying each year due to plastic pollution and we are to be blamed. Because, every single year, we are sending more than eight million tonnes of plastic into the oceans. Portraying this grim reality of world’s plastic crisis, on World Turtle Day, internationally acclaimed sand artist and Padma Awardee, Sudarsan Pattnaik created a sand art at Puri beach in Odisha with a message – Beat Plastic Pollution, which is also the theme of this years’ World Environment Day celebrations in India.

The art showcased the unfortunate plight of the turtles that die each year from ocean pollution as they mistake plastics and other garbage as food. This mistake causes blockages within their digestive system and eventually takes their life. Sharing the message with netizens through his social media, Sudarsan Pattnaik said,

On #WorldTurtleDay, my sand art at Puri beach in Odisha with a message #BeatPlasticPollution.

Also Read: Our Oceans, Our Future: Sudarsan Pattnaik Calls The World To Act Against Plastic Menace

Thank you @sudarsansand for raising awareness about the need to #BeatPlasticPollution to help turtles ? on #WorldTurtleDay!

This is not the first time, the sand artist has created beat plastic pollution themed artwork, a few days ago, on Earth Day, Mr Pattnaik created an artwork that showed a crocodile with a plastic bottle in its mouth with a message – Stop Pollution, Save Earth.

Along with plastic pollution, Mr Pattnaik is known for creating innumerable sand arts revolving around the theme of cleanliness, sanitation and garbage crisis.