New Delhi: As an Accredited Social Health Activist or ASHA worker, 35-year-old Nisha Choubisa works with the Anganwadi in her village Majawada near Udaipur since January 2018. Like many villages in India, awareness about health and nutrition especially with regards to pregnant women and infants was very low in Nisha’s village, Majawada. Most villagers preferred home births and had very little or no knowledge about the post birth care for both mother and infant. As part of her field-work, she covered 10-15 houses every day, personally talking and explaining the importance of nutrition to pregnant women and lactating mothers. Nisha says she loves her work,

I just try to explain to them that only healthy mothers can produce a healthy offspring, she says.

Nisha holds a Bachelor’s degree in Arts and is married to Bhupendra, a secondary school pass out who drives his van on a contract basis. She credits her two sons – Dhruv and Krishna –for her own focus shifting towards health and nutrition. She says becoming a mother really changed her perception about not only hygiene but also influenced her perception about nutrition.

Before she joined the Anganwadi in her village, she worked as a teacher in a private school, teaching Science and English to children studying in 6th to 8th grade. According to Nisha, the biggest barrier to development in her village was the regressive mentality set in stone among villagers which were detrimental to the health of both women and new borns. Nisha joined the anganwadi because she wanted to bring about a change.

Even though I loved teaching kids, I decided to quit and and work as an Aganwadi worker because I felt that my village and the anganwadi needed me more than the school. They were more into superstitions, and preferred to visit a monk and get ‘jhaad-fook’ instead of vaccinations for newborns. Pregnant women were forbidden by their parents and in-laws when it came to intake of dairy or oily food among other such restrictions, as apparently it would result in baby getting stuck in the womb! I am educated and was teaching science, so I knew none of these myths have any scientific basis. I wanted to help change this mentality and now I get the chance to have one-on-one interaction with people to tell them what they should or shouldn’t do in their condition, as per medical professionals’ advice.

Talking about her journey as an Anganwadi worker, Nisha told NDTV,

Earlier, lactating mothers did not know what they should eat or drink. Sometimes, intoxication would go on during pregnancy and lactation, issues of health, hygiene and nutrition was never taken too seriously. Basic dairy products which are rich source of iron, calcium and protein like curd, milk, were not even found in their homes, because they didn’t know the advantages or the necessity of these products. 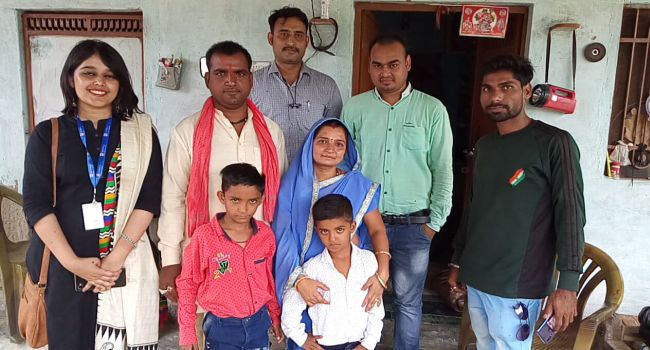 Nisha, with her family and the IPE Global team

Even after mothers gave birth, vaccination for children was not considered very important in her village, she says. It was Nisha who paved the way for the villagers to access healthcare by educating them.

I would just encourage them to access the facilities the government has provided for them – be it free vaccination, blood pressure check-ups, health check-ups or childcare and nutritional information.

On her field visits, she also talks to the mothers of two or more children kids about contraception options like birth control operations, pills, among others.

Her anganwadi supervisor, Nemichand Meena, credits Nisha, for the increase in the number of Antenatal care (ANC) registrations under the Pradhan Mantri Surakshit Matritva Abhiyan.

According to the data recorded in Pregnancy, Child Tracking and Health Services Management System, an online web based system is used as a planning and management tool by Rajasthan’s Medical, Health & Family Welfare department, before January 2018, when Nisha joined, the village was struggling with the ANC registrations, as women and their in-laws would be reluctant to get themselves registered. For the last six months, we have been observing 100 per cent registrations. Villagers now have also realised the importance of hospital births and there has been a decrease in home births, ever since Nisha has started working with us. We still have a long way to go, but we are confident, that with Nisha’s passion, we will make significant improvement in the health status if the village. 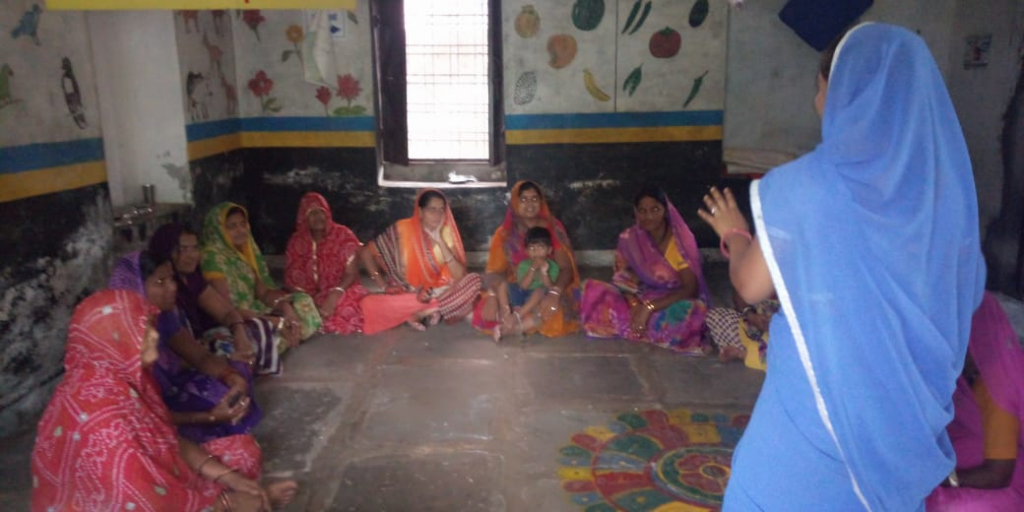 Nisha at her Anganwadi

For her efforts as an Anganwadi worker helping new-borns and pregnant women, Nisha recently won a Nutrition Warrior award at the Outlook Poshan Awards. Talking about her efforts that won her the tittle, she told NDTV,

In December 2018, IPE Global, an Indian- International development consultancy that has been conducting healthcare training sessions with various anganwadis across India, had organised training sessions in our anganwadi, where they taught us about the nutritional needs of mothers and infants. Under this programme I was encouraged to organise meets with new mothers and pregnant women to share the knowledge with them and ensure that they take proper diet, know the ABCD of breastfeeding and most importantly realise the importance of the first 1000 days of a child which include the nine months of pregnancy. I organised five such meets and IPE global was really happy with the way I solved everyone’s query and noticed my passion. I have now made it my mission to eliminate issues like infant mortality and maternal mortality from my village.

Nisha describes her journey as tough, as earlier she didn’t have much support from her community.

It was initially tough for me. Women would not even let me enter their homes. I remember when I started first week I struggled to just get people to listen to me. It’s not easy to interact with people living in rural areas as it’s an introvert and conservative society, especially if you trying to debunk myths and trying to teach them something new. But now, people have realised that I only mean well and the whole village stands by me, she says.

Another challenge, a bigger one as she says, was the low participation of pregnant women during discussions on sensitive issues like women’s reproductive health. That’s where her training from IPE global came in handy she says,

In our training we were taught how to encourage women to participate in such conversations. I told them stories and played interactive game and songs to teach them the importance of antenatal care. After the first few home visits and counselling sessions, the women started listening to me. Today, all the women across Majawada have adopted better nutrition practices. They also have access to basic healthcare services.

Now when she visits a house, people from nearby houses also want to join in and learn from what she has to say.

Being an ASHA worker, I think I have done my best. I wish that all the other ASHA workers in different parts of the country would also do the same. I wish to see positive changes among poor women, I want them to be empowered, she says.

During the COVID-19 pandemic, Nisha personally visited each houses where there were suspected cases and motivated them to get tested for coronavirus. She also visited each patient personally and distributed medicines to them and kept a check on their health. When the time came to get the COVID-19 vaccine,  she explained her villagers how important it was to get the vaccine to save lives. Nisha says that today, her fellow villagers have taken three shots of COVID vaccine.

ASHA (which means hope in Hindi) is an acronym for Accredited Social Health Activist. ASHAs are the grassroot health workers assisting the Ministry of Health and Family Welfare (MoHFW) in delivering primary healthcare, particularly for women and children, in both rural and urban areas since 2005. There are over 10 lakh ASHA workers in the country. In May 2022, the World Health Organisation’s Director-General Dr Tedros Adhanom Ghebreyesus honoured ASHA workers for their crucial role in linking the community with the health system, to ensure those living in rural poverty can access primary health care services, as shown throughout the COVID-19 pandemic. India’s ASHAs are among the six recipients of the WHO Director-General’s Global Health Leaders Award. The award ceremony was part of the live-streamed high-level opening session of the 75th World Health Assembly.