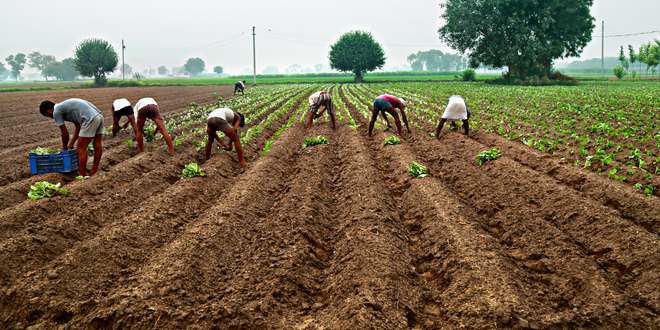 The threat of climate change to food security not only affects farm productivity or income levels of producers, but also endangers the future of entire populations

Climate change continues to threaten food security, with the recent report by the Intergovernmental Panel on Climate Change (IPCC) pointing to a decline in agricultural productivity by 21 per cent due to global warming, coupled with factors such as adverse weather events and weakening soil quality. This comes at a time when we are facing higher demand from a growing global population, including a rise in the number of people affected by hunger. The impact of COVID-19, rising global food inflation, and supply side pressure from the ongoing conflict in Ukraine have only exacerbated the situation. While the 27th Conference of Parties (COP27) summit at Sharm el-Sheikh, Egypt, focused on food security as one of its main agendas, the roundtable session on November 7 received a tepid response, with an absence of major announcements that could help unlock one of the most critical challenges we face today.

The State of Food Security and Nutrition in the World (SOFI) 2022 report by the United Nations (UN) paints a grim picture, with the number of people affected by hunger reported to be 828 million in 2021, an increase of 150 million since 2019. As of 2020, it was also reported that 3.1 billion, or nearly 40 per cent of the world population, could not afford a healthy diet. Nearly a billion of them live in India alone.

Access to adequate nutrition, which includes appropriate amounts of macronutrients like protein and like Vitamin A, plays a major role in food security. For instance, a deficiency of micronutrients contributes to stunting, wasting, and lasting immunity-related problems among children. An IPCC report from 2019 shows that the rise in mean global temperature has already begun impacting the nutrition quality of crops like wheat and maize in many lower-altitude regions. The threat of climate change to food security not only affects farm productivity or income levels of producers, but also endangers the future of entire populations.

It was, however, encouraging to note that several major food firms launched a roadmap at COP27 to eliminate deforestation by 2025, even as we are yet to see how these commitments play out. Agricultural activity using heavy, intensive industrial-level inputs and practices produce a significant amount of greenhouse gas emissions. They also impact important carbon sinks such as the Amazon rainforests due extraction of raw materials through deforestation. Thus, climate change is not only a threat to food security but is also caused by intensive agricultural practices.

While the debate on climate finance for technological innovation and adaptation and transition to sustainable agricultural practices — especially for a vast number of small producers in developing countries — has come to a deadlock, perhaps it is time to also look at alternate mechanisms to address these challenges.

Using traditional knowledge, indigenous practices, and locally sourced crops is a key way to move towards sustainable agriculture as well as ensure food security. It is noteworthy that the Government of India’s POSHAN Abhiyaan lays emphasis on this bottoms-up approach, given that climate change has already begun to impact the country. Estimates suggest that India is witnessing issues like a decline in monsoon precipitation and lowered yields of major crops like rice and maize.

The use of inputs like fertilizers and high-yield variety seeds have proven to reduce soil quality over time and require intensive irrigation, creating pressures on the local biodiversity and ecology. Instead, practices like rainwater harvesting and organically grown local food crops work well with the environment. For instance, locally sourced species are well known to be in line with the water availability of the region, are less irrigation intensive, and are more resistant to local pests and diseases. Thus, such practices also lower input costs, helping reduce the economic burden on the producer.

A 2021 study published in PubMed shows how the traditional food systems of the Adi tribe of Arunachal Pradesh, comprising vast varieties of local plant species, generated income and provided nutritional security. A recently published study by Vitamin Angels India and Observer Research Foundation also argues that for regions like Northeast India, the issue of malnutrition could be addressed by creating sustainable food systems that rely on the region’s agro-biodiversity and traditional knowledge of its tribal populations.

Such a bottoms-up approach takes on the twin goals of ensuring sustainability and access to adequate nutrition. Given the slower pace of innovation for sustainable agriculture and persistent issues associated with climate financing, especially when compared with the rapidly increasing threat of climate change to food security, looking at available means is a reasonably quick way to address the problems we face today.

(About The Author: Sunish Jauhari is the President of Vitamin Angels India.)