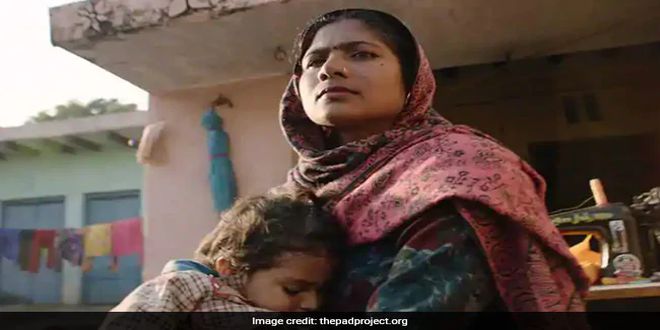 Kathikhera (Hapur, Uttar Pradesh): It’s 9 a.m., and as most Kathikhera locals head to the fields, the village’s seven women prepare their two-room pad-manufacturing factory unit for the day. An avenue for employment and financial gains, the unit has turned around the lives of not just these young harbingers of menstrual health, who make low-cost biodegradable pads, but also the many rural women who have now switched from cotton cloth to sanitary pads.

This silent change happening in a small village located barely a hundred kilometres from the national capital, took the world by storm when a documentary film, ‘Period. End Of Sentence’, based on the hamlet and its small pad-manufacturing unit won an Oscar at the Academy Awards in Los Angeles last month.

However, it was not the award that changed people’s perception in Kathikhera about sanitary pads and a subject like menstruation, considered taboo especially in rural India. The transformation had already started to gradually take place in January, 2017 when the home-based unit was set up to produce sanitary napkins using low-cost machines invented by social entrepreneur Arunachalam Muruganantham, popularly known as ‘Pad Man’.

This transformation was visible when people of the village, and even nearby villages, gathered outside the small “factory” to celebrate the Oscar.

Having used cotton cloth to absorb menstrual blood all her life, a veteran, Harchandi Devi (67) recounted her struggle with her first period. “I didn’t know what a period is, until it showed up. I asked my saheli (friend) and applied a cotton cloth. Dikkat aayi, lekin kya karein (I faced problems, but what to do),” Harchandi Devi told IANS.

Change is catching up for some like the unit’s female workers, who churn out 600 low-cost pads each day.

One such worker and Harchandi’s granddaughter, Sneha, is among those featured in the 25-minute documentary that touches upon menstrual taboos in the village in the context of the home-based pad unit set up by the family’s daughter-in-law, Suman, a frontline worker of feminist NGO Action India.

Also Read: If We Can Do It, Then Any Girl In The World Can Do It: Sneha, Suman Of ‘Period. End Of Sentence’ Gets Rousing Welcome

Kathikhera’s women might have painted the Oscars red, but a closer look on-ground tells us that the going, in fact, was not without cramps. Until congratulations poured in after the Oscar win, many villagers took the pad factory to be a unit for children’s diapers.

Sushma, a worker also seen in the film, streaming on Netflix, explained the hardships of working in the pad unit.

Never having used a cotton pad herself, Harchandi now often closely observes the workers, some of them from her own joint family. Her 22-year-old granddaughter, Rakhi, tells the story of her mother using the pads made in the unit.

My mother used to use cloth first, then we made her understand that pads should be used. Cloth is often dirty and causes infection. Pads are cleaner and good for health. She made the switch and remains quite stress-free during that time of the month.

A Delhi Police force aspirant like Sneha, Rakhi shared: “A few people objected saying ‘yeh toh sharm ki cheez hai, isse sabke saamne nahi share karna chahiye” (This is a matter of shame, it shouldn’t be shared publicly). But we got support from our homes.”

The women collectively do everything from mixing wood pulp to applying adhesive to the bottom of the pads. The final product is sold and marketed under the ‘Fly’ brand.

In Kathikhera, a village of around 3,000 people and a sex ratio of 892, menstrual awareness in schools is a far cry too, but change seems to be trickling in. Arsi, an 18-year-old unit worker, recounted her menarche at 16 when she was sent back home by a frightened teacher – a practice she said was common.

I recently went back to my teacher with these pads, told her that is healthier and doesn’t chafe the thighs. She kept some for herself too.

She added that girls who had to skip school for several days every month due to their periods don’t have to do so anymore.

Although they have now won the respect of the village, defending their work initially was harder for some women, especially those who faced a second disadvantage of caste, after gender. The factory set up in a popular Gujjar household, ‘Mohan ki Haveli’, was a difficult workplace for Jat and Muslim employees, who said they faced objections, but continued nonetheless.

Questions of a plastic-free environment and the waste the pads generate are also not foreign to these ambassadors of change, who said the pads’ ‘soft’ plastic sheets biodegrade in about 3 months.

Almost a textbook example of how responsible community and industrial intervention can usher in waves of caste and gender-based sustainable empowerment, the pad unit now makes sales in nearby areas, but is yet to market their products to a larger market.

A small corner in the factory has black polythene bags, to wrap finished pad packets, lest they are seen by others. They are a reminder that more needs to be done still, including making much-needed centres for maternity care and sexual health, and most importantly, avenues where stories and informed advice is shared within the community, including boys and men.

Till then, for many like Harchandi’s teenage granddaughter, who aims to do a PhD in physics, the factory will continue to inspire dreams, help women take charge, and teach urban policymakers an easily replicable and scalable model of bottom-up development, led by female change-makers who deserve to ‘fly’.

Period. End Of Sentence’: “It’s Been A Revolution”, Says The Oscar Winning Producer Guneet Monga In An Interview From Los Angeles