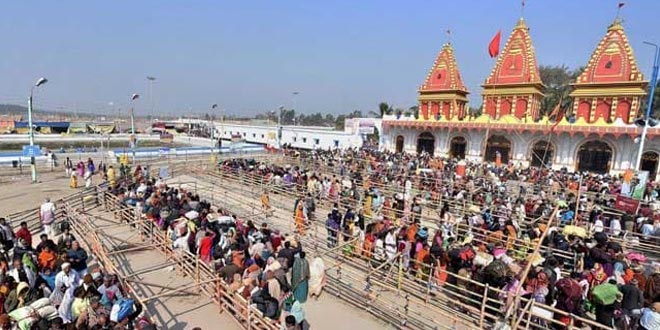 Kolkata: In an effort to make the Gangasagar Mela in West Bengal‘s South 24 Parganas district plastic-free, around 150 inmates of two correctional homes in the city have made eco-friendly bags for distribution among the pilgrims, an official said. More than 50,000 bags made of cotton and jute had been stitched by the inmates of Dum Dum Central Correctional Home and Presidency Correctional Home, the official said. “The environment-friendly bags are made of jute and cotton and being distributed among pilgrims in the Gangasagar Mela. The inmate-turned-artisans of the two correctional homes are excited for supporting the social cause,” said an official of the Presidency Correctional Home.

Every year on Makar Sankranti, lakhs of pilgrims flock to the Sagar Island in the state to take the holy dip and offer prayers at the Kapil Muni temple. The inmates had been trained by an NGO, Rakshak Foundation, in association with the authorities of two correctional homes and the National Jute Board to make the bio-degradable bags, he said.

The inmates have been informed about how use of plastics is harming the environment and are happy for contributing to the cause, the official said.

This year, the Gangasar Bakkhali Development Authority(GBDA) and the South 24 Parganas district administration have decided to make the Gangasagar Mela an “eco-friendly, green and clean fair” by imposing ban on single-use plastic and thermocol items.

Every year, about two crore plastic bags are generated during the mela. Apart from campaigning against the plastic pollution, we are distributing alternative bags among pilgrims during the seven-day fair which started from January 11, South 24 Pargans district magistrate P Ulaganathan said.

Around 50 lakh pilgrims from different parts of the country and neighbouring Bangladesh and Nepal took a holy dip on the confluence of the Ganga and the Bay of Bengal on the occasion of Makar Sankranti on Wednesday (January 15).