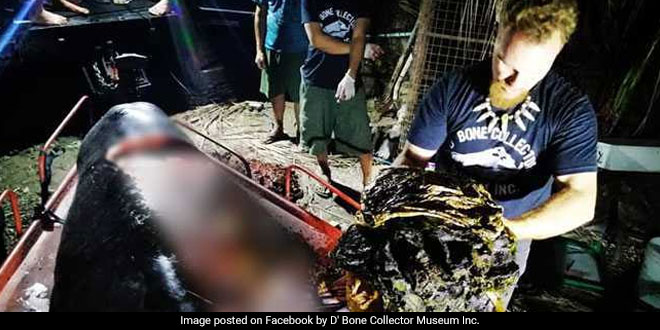 Manila: A young whale that washed up in the Philippines had died from “gastric shock” after eating 40 kilogram of plastic bags, the media reported on Monday. Marine biologists and volunteers from the D’Bone Collector Museum in Davao city, Mindanao, were shocked to discover the brutal cause of death of the young Cuvier beaked whale, which washed ashore on Saturday, the Guardian reported.

In a statement on its Facebook page on Monday, museum officials said they uncovered “40 kilos of plastic bags, including 16 rice sacks, four banana plantation style bags and multiple shopping bags” in the whale’s stomach after conducting an autopsy.

It’s disgusting. Action must be taken by the government against those who continue to treat the waterways and ocean as dumpsters.

The use of single-use plastic is rampant in south-east Asia. A 2017 report by Ocean Conservancy stated that China, Indonesia, the Philippines, Thailand and Vietnam have been dumping more plastic into the ocean than the rest of the world combined.

Marine biologist Darrell Blatchley, who also owns the D’Bone Collector Museum, said that in the 10 years they have examined dead whales and dolphins, 57 of them were found to have died due to accumulated rubbish and plastic in their stomachs.
Last June, a whale died in Thailand after swallowing more than 80 plastic bags, which weighed up to 8 kg.