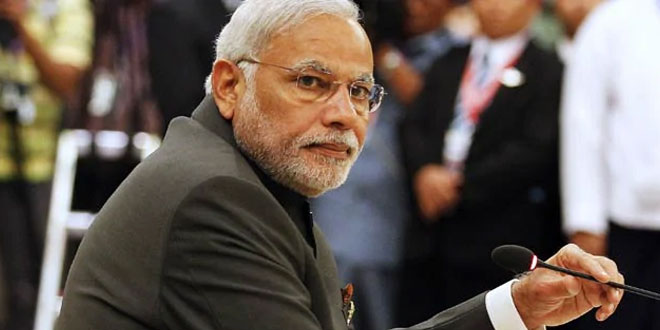 New Delhi: In his first monthly radio broadcast OF ‘Mann Ki Baat’ after winning a second term last month, Prime Minister Narendra Modi talked about the prevailing water crisis in the country and urged citizens to conserve water and use it cautiously. PM Modi in also highlighted the impact of weak monsoon rains saying that it would push millions of drought-hit people to the edge and adversely impact agricultural production in the country.

India received 24 per cent less rainfall than the 50-year average until June 26, as per the India Meteorological Department data, with light showers over central and western regions of the country. The monsoon season is responsible for around 70 per cent of India’s annual rainfall, and is crucial for the agriculture sector, considering more than half of the country’s land is rain-fed.

Only 8 per cent of all the rain water in India is conserved, it’s time to solve this problem, stated PM Modi.

The issue of water scarcity has turned into a crisis this year, after drought in some parts of India in 2018 destroyed crops, wasted livestock, exhausted reservoirs. PM Modi also said that he had written to scores of village chiefs (Sarpanch) across the country about the need to conserve water earlier this month, he explained,

I wrote a letter to the Sarpanchs and Gram Pradhans across the country, that in order to save water, to collect water and save every drops of rainwater, they should convene a meeting of the Gram Sabha and sit and discuss the resolution to this problem with the villagers. I am happy that they have shown exemplary enthusiasm on this front and on 22nd of this month crores of people contributed free labour, Shramdaan, across thousands of panchayats. People in villages resolved to accumulate every single drop of rainwater. There is no one formula to deal with the water crisis across the country.

PM Modi requested everyone in his radio show to share traditional methods that have been used over the centuries in India for the conservation of water.

I urge all of you to share these traditional methods of water conservation, he said.

He further talked about how a new Jalshakti Ministry has been created, keeping the importance of water in mind.

This will allow faster decision-making on all subjects related to water, he said.

He later went on to urge the “luminaries belonging to different walks of life to lead promotion of water conservation through innovative campaigns.”

PM Modi said that there was a need to create public awareness about water conservation and explore traditional water management methods, in the same way the Swachh Bharat Abhiyan to end open defecation started in 2014. The Prime Minister said,

A key source of water, groundwater levels in 52 per cent of wells monitored nationwide were lower in 2018 compared to last decade’s average, the country’s water resources minister Gajendra Singh Shekhawat told parliament this week. A report by NITI Ayog on groundwater level says 21 Indian cities including Delhi, Bengaluru, Chennai and Hyderabad – will run out of groundwater by 2020, affecting around 100 million people. It also says that 40 per cent of India’s population will have no access to drinking water by 2030.