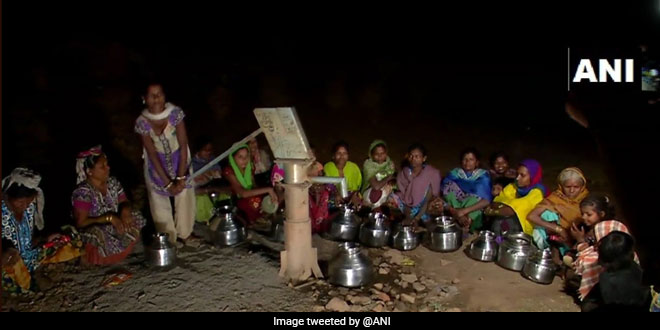 New Delhi: It’s the year 2019 and India, as a developing country, has been witnessing spectacular advances in various sectors. Be it education, technology, innovation, and research, the country of over 1.37 billion people is excelling in these fields with the sheer talent it possesses. Despite the remarkable achievements, the harsh truth remains unchanged – more than 163 million people in India do not have access to safe drinking water. According to the WaterAid report – ‘Beneath the Surface: The State of the World’s Water 2019’, India is suffering from the worst water crisis in its history.

Korwad village of Gujarat’s Valsad district is one of the thousands of villages and cities in the country, where everyday citizens fight a battle for water.

Also Read: A Battle For Survival: To Quench Thirst, Residents Of This Assam Village Collect Water Dripping From Mountains

Jeevika, a resident of Korwad says that the women here have no choice but to walk to a hand pump, located kilometres away from the area and queue up to fetch water, every night. If they don’t, their families have to go without water for the entire day. Jeevika told ANI,

We do not have enough water to fulfil our needs. We are not able to wash our clothes regularly. Every night we have to go very far to fill our pots.

Valsad: Women in Korwad village of Dharampur Tehsil queue up outside a hand pump in the night; say, "There is water scarcity in the area. We work during the day, so take out time in the night to collect water. We've to wait for around 2 hours to fill one pot of water". #Gujarat pic.twitter.com/OR5ZKAKSSy

There is a major water scarcity in the area. We work during the day, so take out time in the night to collect water. We’ve to wait for around 2 hours to fill one pot of water.

Each year, people residing in this area face a severe water crisis. Women are only able to get two to three pots of water each, every day.

Moving towards the Devda village of the Porbandar district, drinking water here is available once in 15 days. Even during winters, water arrives at 3 am at night, for just a few hours, leaving the residents and farmers no choice but to collect it during the peak time of winter winds.

The scarcity of water in the area becomes more severe when the temperature is constantly on the rise. A lot of the districts in Gujarat depend upon rainfall for water but this water crisis has intensified in the monsoon of 2018, as it was declared the worst monsoon season since 1901.

Gujarat received just above 75 per cent of its average rainfall of the last 30 years, resulting in the state government declaring drought in 51 talukas in 16 districts in December, 2018.

Official data suggests that the state government’s water helpline – 1916, has received about 860 complaints regarding water unavailability from early-March through April whereas they have received close to 500 complaints in just the first three days of May.