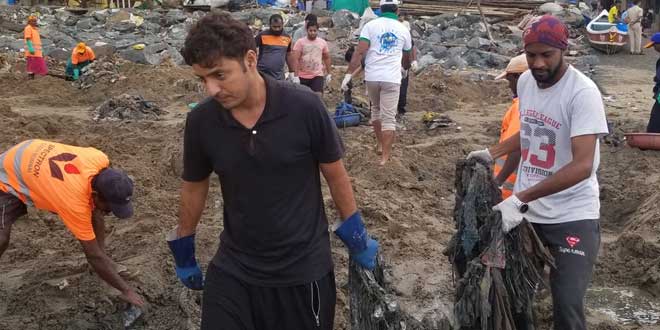 New Delhi: Prime Minister Narendra Modi on Sunday (September 16) applauded environmentalist and lawyer Afroz Shah, the man behind world’s largest and biggest beach clean-up at Mumbai’s Versova beach, for his dedicated efforts towards Swachh Bharat Mission from past few years. PM Modi said, “My friend Afroz and his team have been diligently working towards cleanliness for a long time. We are proud of your efforts and hope you will continue to play a vital role in fulfilling Bapu’s dream of a Clean India.”

My friend Afroz and his team have been diligently working towards cleanliness for a long time.

We are proud of your efforts and hope you will continue to play a vital role in fulfilling Bapu's dream of a Clean India. @AfrozShah1 https://t.co/sBh9gNDgDQ

So far, Afroz Shah and his team of volunteers have been successful in removing more than 17 million kilograms of garbage from Versova Beach which is in its 152nd week of clean-up. Thanking PM Modi for the recognition, UN Environment ‘Champion of the Earth’ Afroz Shah said,

Currently, Afroz along with his team of volunteers are doing the clean-up on a regular basis at the beach instead of just weekends, as they normally do, because of the Ganesh Chaturthi festival which started on September 13 and will culminate after a 10-day celebration with the immersion of the idols. On Sunday, Afroz shared the clean-up activity pictures on his social media and said,

Week 152: #BeatPlasticPollution – Our celebrations of the festival is unique and lovely. We Work hard for 5 hrs in the night and 2 hrs in the morning. That’s the bare minimum we do to show our love for mother nature.

Soon after this post, PM Modi appreciated the dedication shown by Afroz Shah in pursuing their clean-up efforts.

Today, because of Afroz Shah, more than, 50,000 school and college students have been educated about ocean litter, whereas, more than 30,000 people have pledged to adopt a zero garbage and plastic policy in their lives.

Along with Afroz Shah, the Prime Minister also lauded swachh efforts of Indian Coast Guard, Central Industrial Security Force, National Cadet Corps and many others who have contributed in some way through cleanliness drives as a part of the 15-day Swachhata Hi Seva cleanliness initiative from September 15 till October 2.

Plastic Crisis: More Than 20 Sea Turtles Killed In Less Than 2 Months From Plastic Wraps In Thailand