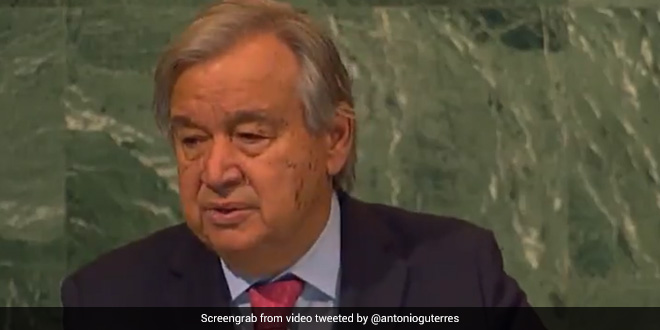 United Nations: U.N. chief Antonio Guterres on Tuesday (September 20) urged rich countries to tax windfall profits of fossil fuel companies and use that money to help countries harmed by the climate crisis and people who are struggling with rising food and energy prices. Addressing world leaders at the 193-member U.N. General Assembly, the climate activist secretary-general stepped up his attacks on oil and gas companies, which have seen their profits explode by tens of billions of dollars. He said,

The fossil fuel industry is feasting on hundreds of billions of dollars in subsidies and windfall profits while household budgets shrink and our planet burns.

We need to hold the industry and its enablers to account.

At #UNGA, I call on all developed economies to tax the windfall profits of fossil fuel companies. pic.twitter.com/7zt8WsxHpr

While Mr Guterres again pushed developed countries to tax the fossil fuel windfall profits, this time he also used his bully pulpit to spell out where the money should be spent.

“Those funds should be redirected in two ways: to countries suffering loss and damage caused by the climate crisis; and to people struggling with rising food and energy prices,” he told the annual gathering of world leaders in New York.

Britain has passed a 25% windfall tax on oil and gas producers in the North Sea, while U.S. lawmakers have discussed a similar idea, though it faces long odds in Congress.

He also said multilateral development banks “must step up and deliver” and that helping poor countries adapt to worsening climate shocks “must make up half of all climate finance.”

Mr Guterres added: “Major economies are their shareholders and must make it happen.”

Also Read: Temperature Expected To Go Up By 2.2 Degrees Celsius By 2050 In Assam

Over 90 Airports In India To Be Carbon-Neutral By 2024: Aviation Minister Jyotiraditya Scindia