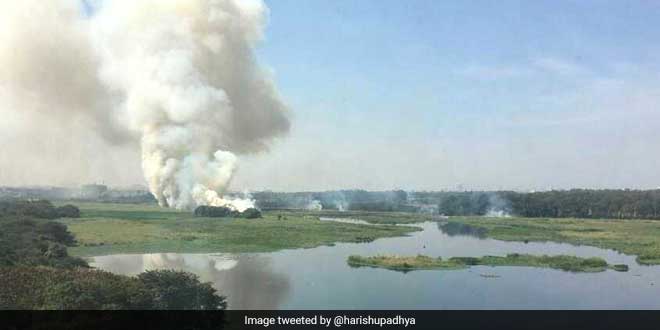 New Delhi: Five days after the Bellandur lake went up in flames, yet again, an emergency hearing of the case at the National Green Tribunal’s (NGT) court premises on January 24, and the Green Court asked the Karnataka government to submit a plan of action by January 29, detailing out the progress made by the state in blocking sewage lines which dispose of untreated sewage directly into the lake and removal of silt and weed from the lake. Once Bengaluru’s largest water body, the Bellandur lake today is hazardous at multiple levels. The lake caught fire for the fourth time in one year on January 19. It  took 5,000 soldiers over 30 hours to bring the fire under control.

It was in March 2017 that Bellandur lake first came into the national limelight with three instances of the  lake catching fire. Disposal of untreated sewage by industrial and residential settlements have made Bellandur lake prone to frequent fires. This is what was  has become of the 1,000-acre lake, it is a heap of weeds and water that is polluted enough to emit harmful froth and catch fire frequently.

Frequent fires and toxic foams are not new to Bellandur, as 2017 had shown. Last year, the NGT had directed all stakeholders to come together and ensure that the lake was cleared out of weeds. These included, the Bengaluru Development Authority (BDA), Bruhat Bengaluru Mahanagara Palike (BBMP), Government of Karnataka and Karnataka Lake Conservation and Development Authority (KLCDA). The action undertaken by the authorities has clearly not been enough. Despite top officials committing to ensure cleanliness in the lake, the de-weeding process is yet to completed, with the BBMP stating that it may take up to 2020 to clean the lake thoroughly.

So does that mean that till then the current plight of Bellandur and the eruption of frequent fires continue?

People keep disposing of garbage into the lakes. Despite the closure order, some industries are still operational near Bellandur which is dumping sewage into the lake. The lake can never be restored unless these issues are addressed, said BBMP Chairman Manjunath Prasad.

The presence of too many stakeholders has done Bellandur more harm than good. Despite the NGT order of no industries within 500 metres of the lake, some continue to function. The state government has not been able to close these, citing legal issues. Further, enough security is not present to monitor activities around the lake, resulting in people dumping garbage in the lake. Both the KLCDA and BBMP for the past one year have pointed towards the state government’s failure to provide security at the lake.

Those who are dumping waste in the lake are not apprehended by the government. The lake is being cleaned but if the waste continues to come in, the cleaning process will never see completion, said Rajnish Singh, Commissioner, Bengaluru Development Authority.

After the January 19 fire breakout, the BDA cited that it was solely due to people dumping garbage in the lake, such incidents continue. However, Namma Bengaluru Foundation, an advocacy group which appeared at the NGT hearing showed proof that the January 19 incident was not an isolated one and due to the lax attitude of all the stakeholders, the Bellandur lake was up in flames on many occasions last year as well.

There is not a single reason why Bellandur lake goes up in flames so often. Sewage disposal, garbage disposal and inability to clean the lake on time have all resulted in the lake becoming a dumping yard today. The NGT must act strictly and hold all stakeholders responsible for the present status of Bellandur lake, said Sridhar Pabbisetty, Chief Executive Officer, Namma Bengaluru Foundation.

The hearing on January 29, will determine if the authorities have indeed woken up to the crisis and come up with a cohesive and comprehensive action plan that can be and will be implemented in all earnestness. Till then the future of Bellandur remains uncertain.